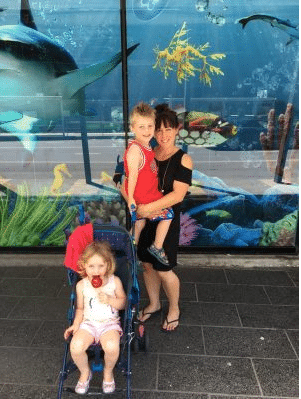 Jade Walker is not one to shy away from a challenge.

When Jade’s friend Libby was diagnosed with a Gastro-Intestinal (GI) cancer in 2017, Jade decided she wanted to do something big.

“The little things we do for people with cancer just didn’t seem like enough,” she says. To show her support, Jade took on the Melbourne Marathon – it was her first long-distance run and she only had seven weeks to train.

“Having Libby as motivation was what got me through,” she says. “If she can go through everything that she’s gone through, I’m just putting one foot in front of the other, that’s nothing.”

“I promised Libby that I would do it again for her,” she says.

In 2018 Jade took on a bigger challenge – the Surf Coast Century, a 100km ultramarathon along Victoria’s surf coast. Then in 2019 Jade took part in the 4-day Western Australian Cape to Cape Gutsy Challenge to raise vital funds for GI cancer research.

This year, after much uncertainty around event cancellations, Jade was excited to discover the Surf Coast Century would be held once again in December 2020. This time, she will be running with her good friend Cathryn.

Jade says that the run itself is a way of showing her support for what Libby has gone through, and to help other families affected by GI cancers. “I think that knowing how aggressive the cancer has been with Libby and how sudden it was, it hit me,” she says. “It’s something that I’d never heard of before until she was diagnosed.”

“It’s a privilege for me to be able to do the run,” she says. “Libby actually donated the other day, and said, ‘It helps other families go through what we’re going through.’ Seeing her generosity – that she’s still thinking of other families even with everything she’s going through, it’s the least I could do.”

Jade and Cathryn have raised close to $2,000 this year to support people like Libby and the 28,600 Australian’s diagnosed with GI cancer each year.

We wish Jade and Cathryn the best of luck in their 100km marathon!

To learn more or support Jade, go to www.gicancer.org.au/Jade.