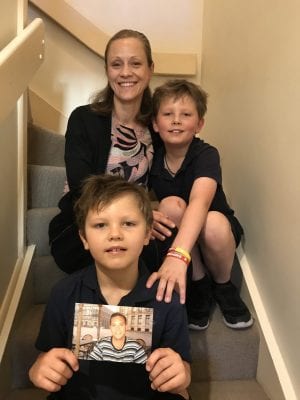 A Champion for Stomach Cancer Research

In 2013, Trine lost her husband Matt to a rare type of stomach cancer called Linitis Plastica, just a year after his diagnosis.

Linitis Plastica has very poor early diagnosis rates and minimal treatment options, resulting in only 8% of patients surviving beyond five years, leaving few patients who can raise
awareness of the need for new treatments.

Matt passed away from Linitis Plastica at the age of 40, leaving behind Trine and their two sons, Daniel and Oliver. Determined to fight for those who can no longer fight for themselves, and see an improvement in survival rates, Trine set up the Silly Hat for Matt Gutsy Challenge in 2018.

Through her efforts and the support from family, friends and the wider GI cancer community, that challenge has now seen over $100,000 raised for new research and a dedicated grant created in Matt’s honour. The inaugural Gastric Cancer Research Grant (including Linitis Plastica) made possible largely thanks to Trine and the support of the GI cancer community, was awarded to Professor Niall Tebbutt to support his new translational research project, to improve outcomes for stomach cancer patients.

“I do not want Matt’s cancer and his death to be just another statistic in the rare cancer book, which nobody ever reads,” Trine said. “Too often with Linitis Plastica, there is no one to tell their story. I know Matt would have given me his blessing to raise awareness by telling his.”

It’s amazing community members like Trine who demonstrate how commitment and fundraising support can deliver new research and get us one step closer to improving treatments and saving lives. We look forward to sharing progress from the grant-funded research.

Learn more about the signs and symptoms of stomach cancer