Addressing the burden of bowel cancer 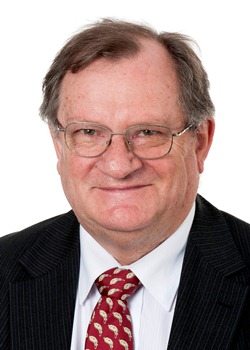 Addressing the burden of bowel cancer

Based at the Royal Melbourne Hospital, Professor Finlay Macrae is a clinical researcher whose major focus is the primary and secondary prevention of bowel cancer.

“Primary prevention meaning to stop the cancer in the first place,” Macrae explained, “and secondary prevention to detect the cancer early and increase the chances of successful treatment.”

Macrae heads up the Colorectal Medical and Genetics Department, a new hospital department that has been shaped around his research.

He is driven by applying the model of randomised controlled trials (RCTs) into the field of prevention.

“RCTs are pivotal to the understanding and implementation of clinical practice,” he said. “They can be applied to answer questions around prevention just as well as to studies looking at new treatments.”

Diet, chemoprevention and bioactives — extracts from food that have a potentially protective effect on the bowel — are some of the areas Macrae’s work covers. And the trials he conducts run for years, if not decades. Studies looking at the prevention of cancer often require this length of time to generate an outcome.

Is red wine protecting you?
One trial that Macrae is enthusiastic about involves red wine, or a component of red wine called resveratrol.

“There is good evidence from lab work that resveratrol has anti-cancer effects on cancer cell lines and prevents bowel cancer in animal models,” he said. “Now we are looking at its effects in humans.”

Macrae is leading a trial in Victoria to see whether resveratrol has a protective effect against bowel cancer in humans. Funded by Cancer Australia, the study uses a dealcoholised form of resveratrol extracted from grapes provided by the Australian Wine Research Institute in Adelaide

Trial participants drink an extract from grapes or a placebo once a day for six weeks. A biomarker-type approach is then taken where the lining of the rectum is assessed for its molecular profile.

“We look at the mucosa, the cells in crypts and the genes that are expressed in those cells,” explained Macrae. “The aim is to build up the evidence behind resveratrol as a substance requiring further evaluation.”

The trial is currently underway and is open to anyone who has a family history of bowel cancer or people who have already had polyps or bowel cancer.

“We currently have 100 participants enrolled and we’re hoping to recruit a total of 128 people,” Macrae said.

Nurturing good gut bugs
Another trial Macrae said is in the pipeline will look at the effect of resistant starch from maize. Resistant starch is more difficult for humans to digest, it effectively resists digestion. It then makes its way to the colon undigested where it provides food for gut bacteria.

When gut bacteria eat resistant starch they produce butyrate, which has a protective effect against cancer in cell and animal models. It has also been shown to reduce inflammation in the gut and regulate motions.

Macrae is partnering with CSIRO in this work to design a multi-center multi-state RCT to test to a CSIRO product.

“CSIRO have had a long interest in butyrate and have chemically attached a halo of extra butyrate molecules to the backbone of the resistant starch,” he explained. “Then, when it is eaten and reaches the colon it meets the bacteria who digest it and they release an abundance of butyrate.”

As a way of fast-tracking the trial, study participants will be required to have familial adenomous polyposis, an inherited condition in which numerous polyps form in the colon. If left untreated people with this condition develop bowel cancer by the time they are 30 or 40 years old.

People with this condition will be invited to test the CSIRO product and monitor the disappearance of polyps.

Aspirin as a preventative
In a trial Macrae was involved in about six years ago, people who had a history of taking aspirin were shown to have a reduced risk of bowel cancer.

The study involved a high-risk group of people with Lynch syndrome, an inherited condition that increases the risk of many types of cancer including bowel cancer.

“We have a good handle on these patients,” said Macrae. “They have a 50% chance of getting bowel cancer over their lifetime because of their genetic predisposition.”

Half the study participants were given two aspirin per day over four years and the other half were given a placebo. Disappointingly for those involved in the study, after about four years no difference was found between the two groups.

But another study that had been looking at aspirin and heart disease showed that after 10 years a decrease in the incidence of cancer in those taking aspirin was seen. This inspired Macrae and his colleagues to revisit the results of their aspirin trial.

“We found that after six or seven years cancer decreased in the group that took aspirin,” said Macrae, adding that the work was published about 18 months ago in the Lancet. “Now we want to see if the same effect can be achieved with a lower dose.”

Macrae is enthusiastic about looking at different doses of aspirin for use as a preventative in bowel cancer. In the first study they used 600mg, the highest reasonable dose to give people. Now they want to assess 100, 300 and 600 mg doses in 3000 carriers of the Lynch syndrome gene.

“We have applied for funding in the current NHMRC grant round for this work,” said Macrae. “We will know whether we have funding in late October.”

A committed teacher
Macrae’s commitment to teaching and training in gastroenterology in Fiji was recently recognised with The Masters of the WGO award. The award is the highest honour bestowed by the World Gastroenterology Organisation, a federation of 108 international gastroenterology societies and associations.

Macrae developed a skills transfer program in collaboration with local academics that takes place at the Fiji School of Medicine in the Fiji National University. The first program was run about six years ago and it hasn’t looked back.

Gastroenterology is one of many disciplines that make up the program at the university, each discipline is taught for one month.

“Our program takes place in July each year,” said Macrae. “We send a team of four gastroenterologists from Australia. There is a big need for them to upskill in gastroscopy and colonoscopy, and we focus on this.”

The training program extends to doctors across the South Pacific, not just Fiji, and also supports endoscopy nurses. Macrae said the model they have developed to direct the program in gastroenterology has been acknowledged by all involved as an effective way to interact at a training level. It involves teaching sessions in the morning and ward rounds in the afternoon.

A network of about 40 Australian gastroenterologists, surgeons and clinicians have taken part in the program to date – Macrae is about to head off for his third visit.

An expert in bowel cancer