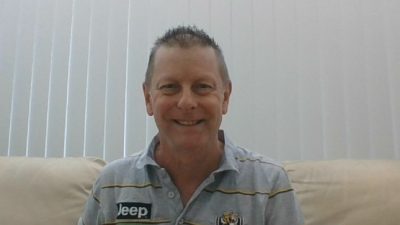 Andrew Clacher on his “dance with cancer”

“I was sort of getting fed up, because I’d tell people what I had, cholangiocarcinoma, and always their first question was, ‘Oh, what’s cholangiocarcinoma?’ I’d have to go through the whole spiel, and tell them what the liver does, and I thought, I want people to have a bit more awareness of what it is.”

Andrew Clacher only discovered that he had biliary tract cancer when he was being treated for a separate issue.

He had small stones in his gallbladder that were causing him pain and underwent surgery to have them removed. While he was recovering, his surgeon visited him and told him that an X-Ray had revealed a shadow in his biliary tract. Further tests revealed that he had a tumour and a week later he went through surgery again, this time to remove it.

While recovering, he developed an infection that resulted in him being kept in hospital for a further 6 weeks.

“I spent another month or so with drains inside of me, draining out this infection, and hitting me with antibiotics,” he remembers.

After such an unexpected diagnosis followed by complicated surgery, Andrew was relieved that the operation was successful. However, his relief was short-lived, as it is for many people with digestive cancers. Three months after his surgery he had a CT scan which revealed 12 lesions in his liver. They were all cancerous.

He underwent a six-month course of chemotherapy, and the tumours seemed to disappear as a result. After a break from treatment, however, tests revealed that five of them had returned.

“In a way, I sort of took a positive out of that,” says Andrew. “I said that’s seven down, we’ve only got five to go.”

Andrew then went through another six months of chemotherapy treatment consisting cisplatin and gemcitabine. Thankfully, his latest tests revealed that all signs of tumours had disappeared, and that his cancer markers had gone from 6,000 to 47.

The highs and lows of Andrew’s experience is characteristic of many people with digestive cancers like biliary tract cancer, or cholangiocarcinoma. This cancer is difficult to diagnose and survival outcomes are relatively low: the five-year survival rate for cholangiocarcinoma is 20%, compared to breast cancer which has a survival rate of 90% and prostate cancer which has a survival rate of 92%. Andrew’s personal experience during treatment led him to look further into the reason for this gap.

Andrew began doing his own research into cholangiocarcinoma, and why it there is such a gap in survival outcomes for people with this cancer.

“I started reading into the politics of rare cancers and especially cholangiocarcinoma, and it was scary the lack of financial support the government was giving people with rare cancers,” he says.

He travelled to Canberra, and met with politicians including Catrina Bilyk and Peter Dutton to discuss the importance of raising public awareness of rare cancers. He also led World Cholangiocarcinoma Day, on the 14th of February, to be recognised in Federal Parliament, by encouraging politicians to wear ribbons in support. This was the first year that World Cholangiocarcinoma Day had been acknowledged in Federal Parliament in this way.

Speaking about these extraordinary achievements, Andrew says, “It hasn’t been easy.”

“I try to have a positive slant on things as much as possible but I do have my moments where I think about the meaning of life, the universe and everything.”

Andrew has had the support of his wife throughout having cancer, and gives credit to the clinicians and surgeons who have treated him. He also says that staying positive even in the face of incredible challenges has been instrumental to him.

“I’ve been trying to keep positive for as long as possible and it’s still working,” he says. “I think that’s been the biggest part of my – my recovery, I guess you could call it, my trip with cancer, or what I usually say: my dance with cancer. I find that helps.
Share

Genesis of a clinical trial: RENO