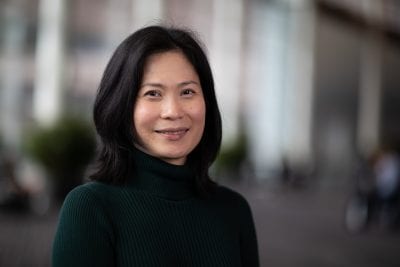 What was the concept that you presented?

The concept is trying to see if we can integrate local ablative therapy into the treatment paradigm for metastatic colorectal cancer. It is specifically to see whether we can get better cancer control and survival benefit by using ablative therapy in addition to standard chemotherapy.

What was the experience of presenting the poster at the New Concepts Symposium like?

Well, obviously it was our first virtual meeting. I’ve had a lot of great feedback from my colleagues about the virtual meeting – people were expecting glitches, but it actually went really smoothly. It was a positive experience for me. Not having face-to-face discussion or questions from the audience is probably the only negative thing. I really like feedback and active discussions with people and that’s a bit limited with a virtual meeting, but the presentation itself and the feedback from the reviewer was fantastic. I enjoyed the challenge of presenting in a virtual platform.

What was it like to receive the Best New Concept Award?

It’s very exciting. Great concepts had been submitted this year, and I thought all three finalists were very competitive, very innovative, and once again it is a different experience at a virtual meeting. We were asked to dial in during the awards ceremony, so behind the scenes we were waiting in a virtual waiting room area, and it was actually quite nerve-wracking. You can see the reactions on other people’s faces, so it was very interesting because you don’t normally do that in life. The concept is usually announced at a dinner where it’s dark and you don’t see anyone’s reaction at all. It’s definitely a once in a lifetime experience for me, but really I’m very honoured.

In terms of your concept, what first sparked the idea?

Last year we had an international speaker at the Annual Scientific Meeting, a radiation oncologist from Stanford (Associate Professor Manisha Palta). She gave a review of local ablative therapy in general and although there were some preliminary data being presented, what struck me was most of the data were very mixed between the tumour types. There haven’t really been more tumour-specific trials. Certainly in the clinic, we do see patients who come through and there’s always discussion of what would be the best approach for them. It’s always a difficult discussion, everyone knows we need better evidence in this area, to determine which patients will benefit from local ablative therapy. Interestingly also at ASCO GI in January, there were a couple of other talks on ablative therapy in GI cancer and in the airport, Adnan Nagrial from Westmead Hospital said, ‘Jeanne, why don’t you start a study?’

During the first couple of months of COVID, things had quietened down a bit, and I had the time to work on it. The concept was there, it just needed a push to get over the line. I discussed it with Julie Chu, my radiation oncologist colleague, and we’re both very keen to move this forward. I think it takes two, because obviously I’m a chemotherapy doctor, and you need someone who gives ablative therapy to make this happen. We both came up with the concept, there was a lot of discussion, and it was really exciting to see it crystallised. It was also great to win the Best New Concept Award and see the support from everyone – to see that everyone agrees that this is an area of need and we need to get more evidence.

If the study is successful, how could it improve outcomes for patients?

We’re hoping to run the study as part of a teletrials program. Not all hospitals have the capacity to deliver ablative therapy, it tends to be in larger academic centres and radiotherapy treatment centres, so a lot of regional patients and smaller cancer centres don’t have access. So we’re hoping that by using the teletrial model, we can allow patients to access these new cutting-edge treatments while still having chemotherapy close to home. So all they have to do is come into the bigger centre, receive the ablative treatment and then go back to their own centre to receive the rest of their chemotherapy. I’m hoping the study will demonstrate the benefit of teletrials and set a precedent on how to do it.

In terms of improving patient outcomes, this is a signal-seeking phase II study so if it’s successful we will need to do a larger phase III trial that will involve more centres around Australia and potentially internationally as well. That will be the final step before it is incorporated into standard practice. I think in about 8-10 years’ time we should be able to change the treatment paradigm if the results generated are positive.

Finally, what advice would you give to someone who is considering submitting a concept to next year’s New Concepts Symposium?

I would say try and get as much advice from your colleagues as possible when it comes to developing your concept. Feedback is so important. The more feedback and ideas you get, the better it is. And don’t be afraid to think about new things. If you have an idea, write it down and talk to your colleagues.

Thank you to Servier, our Annual Scientific Meeting Platinum Sponsor, for their generous support of the New Concepts Symposium.