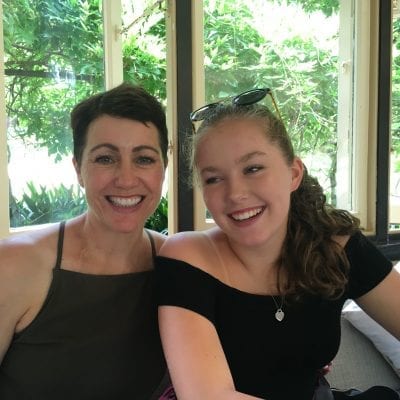 Colorectal Cancer does not discriminate – one patient’s story

“GI cancer does not discriminate. I was only 49 when I was diagnosed.” – Paula Kotowicz, bowel cancer patient

Paula Kotowicz was one of those people who never seemed to catch so much as a cold. In her late forties, with two teenage daughters and a thriving mental health counselling practice, life felt good.

Then, she caught a bad flu in 2015 and afterwards she started having some digestive trouble. Still, she didn’t think there was much to worry about. She dutifully underwent ultrasounds and tests.

The last was a colonoscopy – and that’s when doctors discovered a tennis ball-sized tumour in her bowel.

Bowel, or colorectal cancer is one of the most common forms of cancer in Australia and frighteningly, patients are getting younger. The GI Cancer Institute is working hard on research to discover better treatments that save more lives.

A shocking diagnosis
At first, Paula couldn’t quite take in what the doctors were telling her. She told me, “He didn’t say the word: cancer. I’m thinking of it like you’ve swallowed a button or something.”

But over that weekend in hospital, doctors discovered another large tumour on her liver. Suddenly, the reality of what was happening inside her body came crashing in on Paula.

“The colorectal surgeon kept talking about this tumour. I said, “This is not cancerous, is it?” He said, “Yes, it is, and it’s Stage Four cancer.” Whatever he said afterwards was just blah, blah, blah. I didn’t hear a word.”

The news was a huge shock to her family, particularly her two young daughters. At first, though, Paula and her doctors were reasonably hopeful that, with surgery to remove the two tumours and six months of chemotherapy, Paula could overcome her disease.

But at the end of six months, Paula sensed things still weren’t right with her. Her oncologist, Dr Lorraine Chantrill confirmed her worst fears: her cancer had returned in the peritoneal wall, liver and lungs.

Just 50, Paula was given a prognosis of about two or three years.

Telling her family that it had come back was “terrible”, Paula said. The first time, everyone had been in crisis mode. This time, her chances of recovery were much slimmer.

The worst part was breaking the devastating news to her children. Her elder daughter, Alice was just about to start trials for her HSC. Her younger daughter was heading overseas for a four-week placement at an Ivy League university.

“It was, oh my God, do we tell her? Do we have her be across the other side of the world, upset, not knowing what is going on? In the end, we told her and I don’t know that that was the right thing to do. But I just felt that we couldn’t withhold it.”

Bowel cancer, or colorectal cancer, is known as the ‘silent killer’ because, as Paula discovered, there are few, if any symptoms in the early stages. By the time it is caught in many patients, it is advanced.

GI cancer can strike anyone

When Paula was diagnosed at the age of 49, she was as fit and as healthy as she had ever been. There was no family history. Her experience shows just how random and terrifying GI cancer can be.

The GI Cancer Institute is undertaking pioneering research that will help us give patients like Paula better treatments.

Today, Paula lives with a fortnightly regime of chemotherapy. She has given up her counselling practice and devotes herself to making wonderful memories with her family.

“Mid-year, the whole family went to Rottnest Island for a holiday, there were 25 of us. We would never have done that if it hadn’t been for my cancer. My middle name is Joy and my ex-husband calls these trips the Festival of Joy.”

Right now, Paula’s treatment is holding her cancer at bay, but she knows there will come a time when it won’t. When that time comes, she hopes a clinical trial will have more answers for bowel cancer patients.

If you would like to support us with a donation towards more groundbreaking trials please CLICK HERE now. Every dollar of your donation will go towards vital research that saves lives and provides hope to those diagnosed and their loved ones.