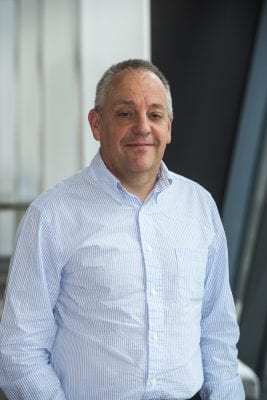 In October 2021, AGITG awarded the inaugural Gastric Cancer Research Grant (including Linitis Plastica) to Professor Niall Tebbutt to develop and apply artificial intelligence (AI) based image analysis for scoring PD-L1 immunohistochemistry in GI cancer. This grant was a direct result of the generous donations made by the GI Cancer Institute community supporters.

How was this grant made possible?

In 2013, Trine lost her husband Matt to a rare type of stomach cancer called Linitis Plastica, just a year after his diagnosis.

Linitis Plastica has very poor early diagnosis rates and minimal treatment options, resulting in only 8% of patients surviving beyond five years, leaving few patients who can raise
awareness of the need for new treatments.

Matt passed away from Linitis Plastica at the age of 40, leaving behind Trine and their two sons, Daniel and Oliver. Determined to fight for those who can no longer fight for themselves, and see an improvement in survival rates, Trine set up the Silly Hat for Matt Gutsy Challenge in 2018.

Through her efforts and the support from family, friends and the wider GI cancer community, that challenge saw $100,000 raised for new research and a dedicated grant created in Matt’s honour. The Gastric Cancer Research Grant (including Linitis Plastica) made possible largely thanks to Trine and the support of the GI cancer community, was awarded to Professor Niall Tebbutt to support his new translational research project, to improve outcomes for stomach cancer patients.

“I do not want Matt’s cancer and his death to be just another statistic in the rare cancer book, which nobody ever reads,” Trine said. “Too often with Linitis Plastica, there is no one to tell their story. I know Matt would have given me his blessing to raise awareness by telling his.” 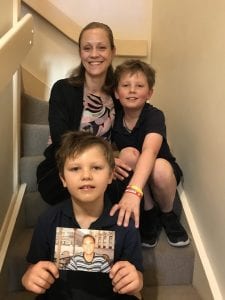 What research is this grant supporting?

Many studies across multiple cancers using immunotherapy drugs have already shown that expression of the PD-L1 protein to be an important predictive biomarker, but up until now, this approach has proven to be technically challenging, both from a pathology capacity perspective and a financial one.

However, by using AI and harnessing the capabilities of computers to undertake visual and spatial analysis, Professor Tebbutt’s research will combine digital pathology with artificial intelligence – a supervised machine will learn to develop an algorithm enabling a computer to derive the combined positive score (CPS) of gastric cancer. The potential outcome of using an AI algorithm to determine CPS will be more consistent, faster and cheaper assessments which could then be made more broadly available in both routine clinical practice as well as clinical trials across the AGITG network.

The initial phase of Professor Tebbutt’s research will train an AI model on a training dataset, and the study will then compare standard pathologist-based testing of the expression of the protein PD-L1 against the predicted output from the trained AI model. If the AI based method is effective, it could enable a more systematic, higher-throughput and cheaper method to identify populations of gastric cancer patients suitable for immunotherapy based on PD-L1 expression.

“There’s no doubt in my mind that over the course of my career we’ve seen improvements in treatments for patients. Given the constant evolution of technology and the enacting change in the world of medicine, I’m very hopeful that this trial will ensure the application of artificial intelligence becomes best practice when deciding optimal treatment for GI cancers,” says Professor Tebbutt.

Thank you to the supporters

It’s amazing community members like Trine who demonstrate how commitment and fundraising support can deliver new research and get us one step closer to improving treatments and saving lives.

“I am very thankful to the donors for supporting this area. We’ve made progress in this area with lots of small steps, and hopefully this is an additional step that will improve treatments and benefit patients with this disease,” Professor Tebbutt said.

We look forward to sharing progress from the grant-funded research.