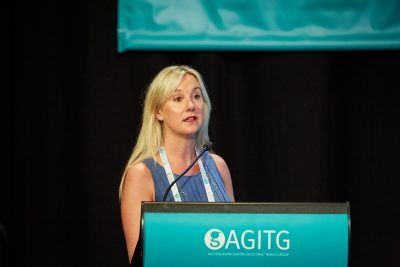 “CONTROL NETs is a globally recognised trial that will influence patients’ treatment and care, not just in Australia but around the globe where access to the best treatments may not be available,” says Simone Leyden, Unicorn Foundation CEO.

The CONTROL NETs study opened in 2015, led by Principal Investigator Associate Professor Nick Pavlakis. So far, it has recruited 69 out of 72 patients in sites across Australia and New Zealand. It is a study of the treatment of NETs that have spread around the body (metastasized) or can’t be removed by surgery, which are incurable with currently available treatments.

“We spoke to Tour de Cure about the importance of trials in an area of less common or rare cancers, where funding is really restricted,” says Leyden. “We don’t get the amount that the more common cancers seem to get, and they saw that there is a huge unmet need.”

The trial tests three different treatment options for NETs patients: chemotherapy, radiopeptide therapy, and a combination of the two. Finding the treatment that is most promising in the CONTROL NETs trial can allow it to be investigated further in a larger randomised trial comparing it with standard treatment, in order to best guide practice.

Research into NETs is valuable because far less is known about them than many other cancers. Studies of rare cancers are more difficult and there is less clear evidence to guide practice.

“It’s not just the results that we will be able to publish, it’s all the rich data that has been collected since the start of the trial that could really guide other trials,” says Leyden. “We’ll be able to analyse this data to have a knock-on effect for other trials, or to guide proper and optimal treatment for NET patients.”

The CONTROL NETs study is currently open to recruitment. More information is available here. The GI Cancer Institute extends its thanks and gratitude to the Unicorn Foundation for its support of this trial.

SPAR trial investigates the use of cholesterol medication in cancer treatment