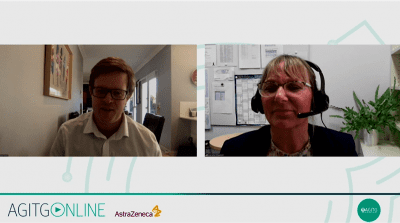 Medical oncologist Dr Oliver Piercey was awarded the Best Poster Award at our Annual Scientific Meeting for his poster ‘Adjuvant chemotherapy in elderly patients with stage III colorectal cancer’. We spoke to him about his research and what it was like presenting the poster at the virtual meeting.

What research did you present at the Poster Session?

We looked specifically at the role of adjuvant chemotherapy in elderly patients with stage III colorectal cancer. A significant portion of the patients who we see in the clinic to discuss treatment options after surgery are elderly, so almost 50% of patients are over the age of 70.

Although we have really good evidence of what to do with patients younger than 70, the evidence for the best approach for elderly patients is still unclear, despite this being a huge group of patients that we need to make treatment decisions about all the time.

Most guidelines support the use of single agent chemotherapy after surgery, but we know that elderly patients are less likely to receive any kind of chemo compared to younger patients. So we were really keen to look at what’s happening in Victoria in terms of differences between older patients. We looked at just over 1500 patients and divided them into two groups, in terms of whether they were older than 70 or younger than 70. Firstly only about 70% of elderly patients get offered chemotherapy, with 30% not offered any treatment at all, and this compares to 96% of younger patients who are offered chemotherapy at the time.

We looked at reasons why elderly patients were not offered chemotherapy and it was mostly due to a combination of age and comorbidities, but a significant portion of patients were not offered treatment because of their age alone. There is actually a move away from treating patients based on their chronological age alone, but really we should be considering their functional status and their comorbidities and their own preferences about chemotherapy. That was the first thing, that there’s a big difference in terms of which patients actually get offered treatment in the elderly compared to the young.

We looked specifically at the elderly patients who were offered chemo because we thought this might be a nicer endpoint to look at because those who were offered treatment were more likely to be fit and have fewer comorbidities. There was a more striking benefit of using chemotherapy, with an improved disease free survival rate.

This is an important group that needs to be focused on more. This is one in six elderly patients who refuse their chemo but would benefit from it if we spent more time with them and we educated them about the importance of having chemotherapy after surgery.

What was the experience of presenting this at the poster session like?

It was a great experience for me to present my data at a big forum, particularly something like AGITG which is a great organisation doing lots of things in Australia for patients with GI Cancer. I presented the poster virtually and everything from the technical side of things went really well. It was interesting to present virtually but it’s still a great way to present.

What was it like to receive the Best Poster Award?

It was actually such a surprise because I was not expecting to win the award at all, so it was a really nice surprise to receive the award. I’d like to really thank AGITG because it was a really generous prize as well. It was nice to hear that people agree with us that this data is really important.

What advice would you give to someone considering submitting a poster to the Poster Session next year?

I would say definitely do it. I found that it was a really nice platform to be able to present research focused on Australian data and patients who have GI cancer. It was great to be amongst specialists who are world leaders in this field and be able to work with them. It was a very smooth process and the conference worked really well so I would recommend anyone present their poster in this forum.