Genesis of an AGITG clinical trial in bowel cancer 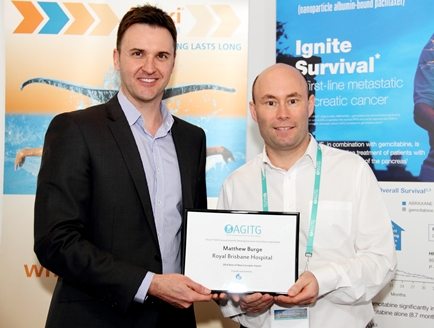 Genesis of an AGITG clinical trial in bowel cancer

To successfully obtain funding for academic research and the establishment of a clinical trial takes a considerable amount of effort, time and collaboration across multi-disciplinary teams.

Follow the genesis of an AGITG clinical trial – MONARCC – from identification of the problem to obtaining funding for a pilot study supported by the AGITG Innovation Fund.

The MONARCC trial seeks to determine what the best initial treatment is for an elderly patient population that may not withstand the side effects of commonly used combination chemotherapy regimens. This is becoming a more common, yet under-researched Australian patient population diagnosed with advanced bowel cancer. The study will compare low intensity chemotherapy with targeted therapy (panitumumab), or panitumumab alone, which is generally well tolerated. The hypothesis is that panitumumab will be a safe, acceptable and effective regimen for elderly and/or frail patients with newly diagnosed advanced colorectal cancer.

Step 1. Identification of a gap in research

Dr Matthew Burge, a medical oncologist, increasingly saw elderly patients presenting with metastatic colorectal cancer who were unlikely to tolerate combination chemotherapy regimens. His patients were at significant risk of experiencing onerous side effects, making it difficult for them to tolerate treatment or gain any meaningful benefit from the treatment provided. Dr Burge identified a need to research more appropriate treatment options for this patient group that could ultimately be applied to younger patient groups.

A search for information to guide the treatment management of his patients confirmed a gap in knowledge.

Step 3. Discussions with colleagues and the pharmaceutical industry

Following the literature review, Dr Burge held a number of discussions with his medical colleagues at Royal Brisbane Hospital, members of the AGITG, and representatives from pharmaceutical company Amgen Australia. He decided the best way forward was to get formal feedback from AGITG members and international speakers attending the AGITG Annual Scientific Meeting, and he entered the study into the 2014 New Concepts Symposium.

The concept was popular and the audience responded positively. Dr Burge received the Award for Best of New Concepts, 2014.

Dr Burge discussed the randomised clinical trial with the Lower GI Working Party.  Based on the verbal feedback from this multidisciplinary group of peers and Amgen, Dr Burge revised the concept to present to the AGITG Scientific Advisory Committee (SAC).

The SAC is the focal point for widespread discussion of research ideas. Its members, who are drawn from the AGITG and the NHMRC Clinical Trials Centre, are experts in the fields of medical oncology, surgery, radiation oncology, biological research, quality of life research, statistics, study  coordination and consumer involvement. The SAC discussed Dr Burge’s research project and ratified the trial under the AGITG name.

Step 7. How to Fund the Study?

To get the study off the ground, Dr Burge decided the way forward was to apply to the AGITG Innovation Fund for a grant of $100,000 to conduct a pilot trial. The data collected during the pilot study would be critical to securing additional funding from either the pharmaceutical company or the NHMRC.

Step 9. A pilot study is started

Five years after Dr Burge’s initial identification of a need for a specific patient population, the pilot phase for the MONARRC Study opened in 2017 with funding from the AGITG Innovation Fund.

“The development of this trial would never have been possible without the encouragement, feedback and scientific input from my colleagues in the Lower GI Working Party and the AGITG Scientific Advisory Committee.”  ‑ Dr Matthew Burge.

Genesis of a clinical trial