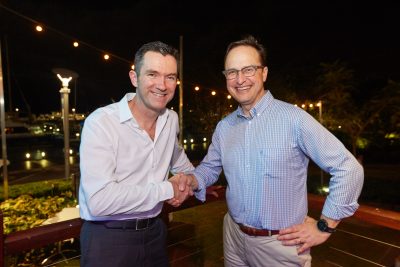 Genesis of a clinical trial: RENO

It takes a considerable amount of effort, time and collaboration across multi-disciplinary teams to successfully obtain funding for academic research and establish a clinical trial. Follow the genesis of an AGITG clinical trial, RENO (REctal cancer No Operation) from identification of the problem to obtaining funding for a study supported by the AGITG Innovation Fund.

Rectal cancer is a common malignancy and comprises one third of the cases of colorectal cancer diagnosed in Australia.  Currently, a combination of chemotherapy plus radiotherapy followed by surgical resection of the rectum is the standard management of locally advanced rectal cancer.  Approximately 20% of patients develop a pathological complete response to chemo-radiation.  In these patients, surgery may not be necessary.  The aim of this study is to assess the safety of the watch and wait approach in this population and to prove the feasibility of a structured follow up program.  The study will also assess novel biomarkers, patient reported outcome measures and health economics, none of which have been studied in this population before.

Step 1. Identification of a gap in research

Ten years ago, Professor Chris Karapetis, a medical oncologist, was treating a young patient with rectal cancer.  This patient had a good response to chemotherapy and did not want surgery due to long-term risks and the possibility of surgery resulting in a stoma.  He insisted on watching and waiting.

Step 2. Discussions with colleagues
Recognising the needs of his patient, Professor Karapetis held a number of discussions with his medical colleagues, including surgeons, radiologists and other colleagues at Flinders Medical Centre in Adelaide to discuss a watch and wait approach.

A search for information to guide the treatment management of this approach identified a few small studies but did not confirm a watch and wait evidence-based treatment path.  There was a distinct gap in knowledge.

Step 4.  Recognition that there was no clear treatment guidance on ‘watch and wait’ approach

Professor Karapetis recognised the need to develop a Watch and Wait protocol based on evidence. He then took the next step and put together a proposal of a concept for a study, titled “Prospective Study of Watch and Wait Strategy in Patients with REctal Cancer who have Obtained a Clinical Complete Response with concurrent Chemo-radiotherapy: RENO trial (Rectal cancer No Operation)”.

Professor Karapetis decided the best way forward was to get formal feedback from AGITG members and international speakers attending the AGITG Annual Scientific Meeting, and he submitted the study concept into the 2016 New Concepts Symposium.

The concept was popular and the audience responded positively.  The proposed study was recognised as of important scientific interest with several meeting participants indicating they would contribute to the study if it were to be opened by the AGITG.

In collaboration with surgical colleagues in Adelaide, Professor Karapetis continued to work on the study plan. This plan was then presented to the AGITG Lower GI Working Party and the concept was also reviewed by the AGITG Scientific Advisory Committee.  The AGITG’s Upper GI and Lower GI Working Parties are the working parties of the Scientific Advisory Committee (SAC).  The working parties include medical oncologists, surgeons, radiation oncologists, statisticians, translational scientists, consumers and allied health practitioners.

Professor Karapetis submitted the study proposal to the NHMRC for funding but unfortunately was unsuccessful.  In 2017, he then made the decision to apply for the AGITG Innovation Fund for a grant to conduct the RENO clinical trial pilot.

Step 9. A clinical trial is started

The clinical trial to provide pilot evidence for this treatment approach opened to recruitment in 2018 with funding from the Innovation Grant, ten years after Professor Karapetis’s rectal cancer patient came to him wanting to watch and wait before further treatment.