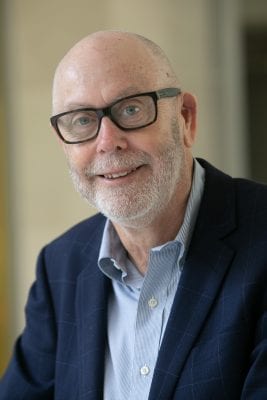 Geoff Parnell on oesophageal cancer and being aware of your health

Geoff Parnell discovered that he had oesophageal cancer almost by accident. Five years ago, after turning 60, he reviewed his insurance, and asked his doctor to test him for every medical condition she could think of. Every test showed that he was fit and healthy – until the very last, an endoscopy.

The test showed abnormalities for Geoff’s oesophagus, and further tests revealed that he had oesophageal cancer. Geoff was stunned – although he had reflux, he had no idea that it was an indication of a serious condition. In two weeks, he was in surgery.

“That was that,” he remembers. “The surgeon told me to cancel everything I was doing for the next six months.”

He says that from there, his life slowed down. Physically recovering from surgery took time and patience, and the emotional effects took a toll for even longer.

“The changes in my lifestyle from the operation got me to a stage of being annoyed that I couldn’t do things.”

He says that he would recommend anyone in a similar position consider counselling to deal with the mental repercussions of cancer treatment and recovery.

“I went to some counselling and that was really, really helpful. I started recognising what I was reacting to and once I did that it has been no longer an issue. You get over the three to six months of the operation, and the physical hit. It’s probably the ongoing emotional hit that’s the hardest.”

Geoff’s experience has made him aware of how important it is to take time to be aware of his health, physically and emotionally.

Before his diagnosis, he had experienced frequent reflux, which can be a symptom of oesophageal cancer, but, he says, had not recognised it as something to stop and take note of. Through sharing his story, he has encouraged his friends and community to notice if they are experiencing reflux, and to consult their doctors. Although oesophageal cancer is rare, reflux can be a symptom of Barrett’s oesophagus, a condition that can increase the risk of developing it.

“I think that’s really key – early detection and awareness in the community around the issues about that,” he says.

Give hope to other GI cancer patients, who often do not have the same treatment options if their GI cancer is not identified early. Support new critical research in to improved treatments for GI cancers, like oesophageal cancer. Please click here to donate (all donations are directed to research and no matter their size do make a difference – providing much needed hope for those diagnosed).

Tips to maintain gut health and immunity over the coming months