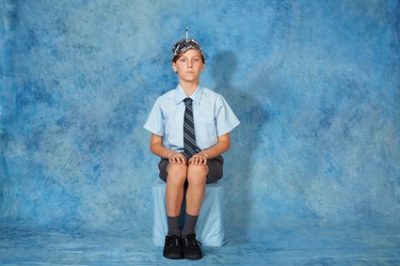 Since 1963, the Australian Theatre for Young People has produced theatre which bridges the gap between youth and the professional theatre. As Australia’s largest youth theatre, the ATYP actively promotes young people’s involvement in the dramatic arts, showcasing productions from young local artists.  More at the ATYP’s website. www.atyp.com.au

The ATYP is also a proud supporter of our Gutsy Challenge, and the GI Cancer Institute’s fundraising efforts. As a demonstration of their support, the ATYP has generously donated five family passes to its upcoming production, Luke Lloyd: Alienoid – fresh from the “out there” mind of AFI and Logie Award-winning writer John Armstrong.

Luke is smart, funny, shy and highly imaginative – but has no friends at school. They see him as, well, a bit “off the planet”. And they’re right: Luke’s father (who he’s never met) came from a distant planet – so Luke is half-human, half-alien: an “alienoid”.

This delightful new play for actors aged between 10 and 13 is the winner of the 2013 ATYP Foundation Commission. Luke Lloyd: Alienoid speaks to the alien in all of us.

NSW families can enter The Gutsy Challenge between now and September for your chance to win these tickets!  Or you can book tickets at ATYP.