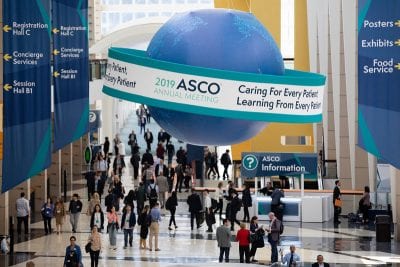 Comments have been provided by Associate Professor Mustafa Khasraw.

This was a phase III trial which found that maintenance therapy with olaparib prolonged progression-free survival (PFS) of patients with metastatic pancreatic cancer (MPC) with a germline BRCA mutation. Olaparib was administered following first-line treatment with platinum-based chemotherapy. It was well tolerated and health-related quality of life was preserved compared with placebo.

A/Prof Khasraw: Genetic testing is not part of the routine care of pancreatic cancer but it is becoming increasingly more common. The results of POLO could prompt more frequent testing in the future.

What the POLO study did was give patients chemotherapy, and then randomise them to placebo or the PARP inhibitor. There was a progression-free survival advantage, meaning the patients who were on the PARP inhibitor were free of progression for longer, however the control arm was placebo, so we don’t know if the same benefit can be achieved from a simple, cheap chemotherapy.

Having said that, it has taken a huge amount of effort and coordination to do a study in a rare subset of an uncommon cancer. It’s very important research to be done, but it’s not going to be without challenges.

This study compared adjuvant nab-paclitaxel + Gemcitabine vs Gemcitabine alone in patients with resected pancreatic cancer. It was found that this nab-p + Gem did not have a significant improvement in OS.

Liquid biopsy is less invasive and faster than traditional biopsy. However, interpreting liquid biopsy results and putting the results to work in patient treatment is a challenge. Doctors can struggle with questions of what positive or negative results mean. Dr Filip Janku comments, “The need for tissue biopsy is not going away.”

A/Prof Khasraw: It’s an important and evolving area of research. I don’t think liquid biopsies will replace conventional biopsies in the next few years. They may have very specific indications. For example if you want to look at EGFR or RAS status, where you can look at a very specific mutation in the blood, it will be very valuable. Tissue biopsy remains the most useful tool to have detailed testing.

There are mixed and insufficient data to support the conclusion that exercise improves treatment tolerability in patients with cancer. The current divergent could be explained by methodologic differences in diagnoses and chemotherapy regimens, training modality, and baseline patient characteristics. A key area for development in the future is investigating combinations of exercise with standard of care therapies.

A/Prof Khasraw: This type of research depends on the type of patient, their age, their disease, their pre-morbid condition, what type of food they eat, what type of exercise they do, and these are all factors that are very complicated to tease out. I agree that more research needs to be done because it is an important question that people care about.

Immunotherapy can cause Immune-Related Averse Events (irAEs). These can involve any end organ. The median time of onset for most toxicity is between 5 and 15 weeks, but can also be seen alter. With appropriate therapy, irAEs are manageable. It is important for clinicians to be aware of the principles of irAE management.

It’s important to recognise immune-related adverse events early, and to have clear policies and procedures to deal with them, and also involve the relevant specialties. It forces the oncologists to take on the role of general physicians, and to work with their peers from different specialties.

The 2018 ASCO National Cancer Opinion Survey found that 64-78% of participants agreed that “alternative therapies are a good supplement to standard care treatment(s)”, depending on age group. In response to the statement “cancer can be cured solely through alternative therapies, without standard cancer treatment”, 39% of participants agreed overall. Findings from a 2018 publication in JAMA Oncology suggest that patients receiving complementary medicine were more likely to refuse conventional cancer therapy with an associated risk of death.

In comparison, recent publications in Journal of Oncology Practice highlight the value of providing centres where patients can have access to integrative medicine clinical consultations and integrative therapies. Integrative medicine uses the best available medicine to bring together complementary health approaches and conventional medicine.

A/Prof Khasraw: That’s again a very interesting and contentious area. Part of the problem is with many of these products – it depends what you include because when you say alternative medicine, that’s a very large umbrella, it doesn’t only include medicine, it includes these other things.

If you go to any pharmacy, they have a section where they sell unregulated products. In Australia, the system is more stringent than the US but it is still not as rigorously regulated as other therapeutic products although vitamin misuse and overuse can have side effects.

A/Prof Khasraw: Pancreatic cancer patients have a higher risk of having VTE. It remains an open question, whether anticoagulants can be widely used preventatively.

A/Prof Khasraw: Maybe there is a subset of patients that can have it and we need to find their characteristics. It is important to publish the detailed outcome of studies like this so patients don’t spend the last period of their life when they are in a desperate situation on a futile treatment.

Pembrolizumab as second-line treatment significantly improved the overall survival (OS) of patients with advanced oesophageal cancer with PD-L1 combined positive score greater than or equal to 10. This was a phase III study comparing pembrolizumab monotherapy versus chemotherapy as second-line treatment for patients with advanced/metastatic squamous cell carcinoma and adenocarcinoma of the oesophagus.

A/Prof Khasraw: I don’t think it is going to make it to the point of practice changing, but similar to other studies we need to see the full publication and confirm the findings.

The role of gut microbes in response to immunotherapy

The gut microbiome is an important emerging biomarker to be considered in the response to and toxicity of immune checkpoint blockade and other cancer therapies. The microbiota is modifiable and thus offers a novel target to improve therapeutic response in cancer. Recent studies have found that patients with a more ‘favourable’ gut microbiota profile were more likely to respond to immune checkpoint blockade. Factors impacting the gut microbiota include diet and other environmental factors, and medications including antibiotics, proton-pump inhibitors, metformin, opioids and antidepressants.

A/Prof Khasraw: There is a lot of interest in this field and there’s several lines of related research being conducted in the area of microbiome. People also find it interesting, because it has to do with diet and lifestyle and where you live and there is a perception that you can control and/or change it.

Stereotactic ablative radiotherapy (SABR), also termed stereotactic body radiotherapy (SBRT) has emerged as a reliable and non-invasive outpatient alternative to surgery for patients with oligometastatic disease (five or fewer clinically detectable metastatic lesions. SABR has potential advantages over surgical resection. It’s less invasive, can target anatomic locations not accessible by surgery, and can be used without interruptions in systemic therapy.

A/Prof Khasraw: It’s a gap that needs to be studied, and we have a community of radiation and medical oncologists in Australia who are passionate about exploring this further.

Drug development in pancreatic cancer: An update on novel therapies

A/Prof Khasraw: It’s actually quite fascinating. It’s immunosuppressant but immune checkpoint inhibitors don’t work on it. I don’t have an answer but I think it’s an important question.

Click here for more GI oncology updates from ASCO from the New England Journal of Medicine.

Latrobe Regional Hospital opens as a primary site for DYNAMIC-Rectal