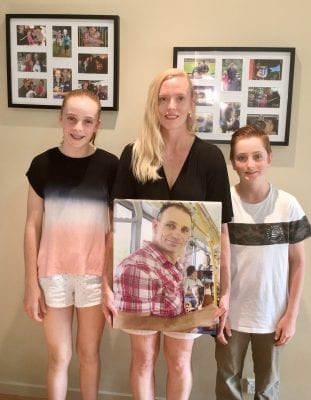 Gill and Tony met in their early twenties. Gill was studying occupational therapy and when she graduated, they moved to country Victoria. Tony was a butcher by trade but he cut a couple of fingers off so he moved into meat sales and was a natural salesman.

Tony was everyone’s friend. He was a very hands on dad, and his kids just adored him. He was a great brother, son, uncle. Everyone who met him loved Tony.

Then, Tony’s stomach cancer diagnosis seemed to come out of nowhere.

“He had an endoscopy, and we were told he had an 11 centimetre tumour. We were both just in shock,” Gill remembers.

Tony’s cancer sadly soon grew to a point where further treatment was not possible. Six months later, he entered palliative care. Gill remembers on New Year’s Eve, the family went to Kangaroo Point to watch the fireworks, Tony in a wheelchair. Two weeks after that, he passed away.

Gill and her family were devastated. She was left with a lasting impression that more needed to be done to help people like Tony in the future.

“I felt like I had something to contribute,” she says. “Giving back to the people who were doing the research, doing the hard yards for people like my husband.”

She joined the GI Cancer Institute’s Consumer Advisory Panel (CAP), a group of GI cancer survivors, patients and carers who provide advice on research directions and priorities from their unique perspective.

“I want people to walk in to their oncologist appointment and be told they’ve got a good chance of survival,” she says. “No one should be told that there are such dismal outcomes for this aggressive cancer.”