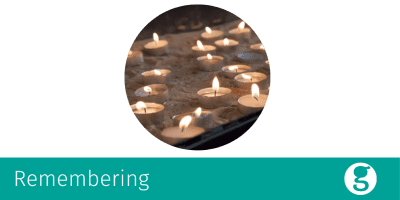 Too many lives were lost to GI Cancer this year.

As 2020 comes to a close, we remember a number of people who have touched our lives and passed away this year from GI cancer. The passing of these public figures shone a light on colon and pancreatic cancer and helped to raise awareness about the devastation these diseases.

Let us also remember the 14,200 Australians who have lost their lives to GI cancer in 2020.

We know many Australian families and communities that have felt the devastating impact of GI cancer this year, and the people who have passed away will be greatly missed. We are thinking of them and their loved ones as 2020 comes to a close.

United States Supreme Court Justice Ruth Bader Ginsberg died at age 87 from pancreatic cancer this year, after serving for 27 years on the nation’s highest court. She had previously suffered five bouts of cancer.

Justice Bader Ginsberg left a legal and cultural legacy from a long career, spanning her work as an architect of the fight for women’s rights in the 1970’s to her service on the Supreme Court.

Chadwick Boseman was an actor known for his iconic roles in Black Panther, Marshall and 42, and his work behind the scenes as a producer of 21 Bridges. He was diagnosed with colon cancer four years ago and passed away this year at just 43 years old.

Boseman is remembered for his striking presence on screen, bringing strength and reality to his roles, and for his commitment to taking changes with his work and leaving nothing on the table.

Beloved actor Irrfan Khan was one of Bollywood’s greatest stars. He also made his mark in Hollywood in Jurassic World, Life of Pi and Slumdog Millionaire, which won eight Academy Awards.

Khan passed away from neuroendocrine tumours, a rare form of GI Cancer. Despite his status as one of Bollywood’s most celebrated actors, he was known for his modesty and integrity and his passing was mourned by fans and film lovers in India and around the world.

John Lewis was a prominent leader of the US civil rights movement during the 1960s, working alongside Dr Martin Luther King Jr. He was elected to Congress in 1986 where he was then re-elected 16 times, serving in the role for 34 years.

Lewis passed away from pancreatic cancer this year aged 80. He remained committed to speaking up for racial equality and promoting civil rights until the end of his life.

Jeopardy host Alex Trebek passed away this year, after hosting more than 8,200 episodes of the game show over 37 seasons.

This time last year Trebek spoke publicly about his pancreatic cancer diagnosis and the importance of being aware of the symptoms as part of Pancreatic Cancer Awareness Month, encouraging many people to learn more about it.

Early detection is key to preventing GI cancers; by being aware of the signs and symptoms and contacting your GP if you experience anything unusual, you can take charge of your health.