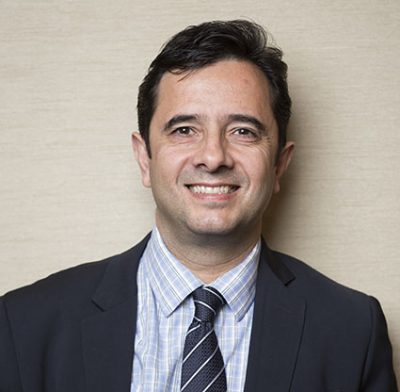 Clinical trials are constantly evolving as new insights come to light. The INTEGRATE studies are a prime example of this, focused on improving survival for people with stomach cancer. Finding a better treatment for stomach cancer patients was crucial; worldwide, it is the fifth most common cancer and the sixth leading cause of cancer deaths. It is a hard cancer to detect as symptoms can be vague, and it is difficult to treat. Despite improvements, people diagnosed with stomach cancer in Australia still have just a 31.2% chance of surviving beyond five years.

Professor Nick Pavlakis wanted to change this for the patients he treated every day. “I started to get into clinical research out of the need to do better for the patient who is in front of me,” says Professor Pavlakis.

The INTEGRATE trial, led by Professor Pavlakis, demonstrated that regorafenib improved progression free survival in patients with advanced stomach cancer that does not respond to usual chemotherapy, providing another treatment option for a cancer that is otherwise difficult to treat.

Armed with this knowledge, in 2015, the GI Cancer Institute brought together leaders in gastro-oesophageal cancer from around the globe to design a major phase III study based on the promising results of the INTEGRATE study.

The outcome of the collaboration was the INTEGRATE II trial, which aimed to investigate if a new drug, regorafenib, is a safe and active treatment for people with stomach cancer who have progressed after treatment with standard chemotherapy.

However, the research landscape continues to evolve. Professor Pavlakis saw new data released that suggested an immunotherapy treatment called nivolumab could also be beneficial for patients with advanced stomach cancer. After reviewing the research, he and his team decided that treating patients with both nivolumab and regorafenib had potential to provide the most benefit.

The INTEGRATE II trial was subsequently adapted into INTEGRATE IIb so that this new treatment could be offered to patients now. In INTEGRATE IIb, regorafenib is combined with nivolumab, which researchers hope can prolong overall survival and improve quality of life for those with stomach cancer.

“There have been some great medical advances using regorafenib and nivolumab, so now we need to test this treatment combination on larger numbers to give families a better chance at having their loved ones survive and have better treatment options,”  Professor Pavlakis says.

INTEGRATE IIb opened in Australia this year. It is an example of the way robust clinical trials take time, but also evolve to take into account the most up to date research from around the world and deliver the best possible treatments to patients.

Battling the Elements for Gutsy Glory