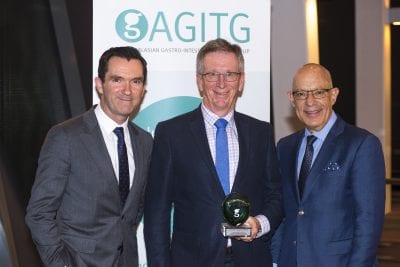 The John Zalcberg OAM Award for Excellence in AGITG Research

Applications for 2019 are now closed.

The John Zalcberg OAM Award for Excellence in AGITG Research recognises a member of the Australasian Gastro-Intestinal Trials Group (AGITG) who has made a significant and outstanding leadership contribution to AGITG research over a sustained period.

Nominations may recognise the contributions of investigators, research staff and lay members of the AGITG including consumers.

Professor John Zalcberg OAM was a founder and is immediate past Chair of the Board of the AGITG. He served in the Chair role for over 18 years until May 2014.

He was the Director, Division of Cancer Medicine, at the Peter MacCallum Cancer Centre in Melbourne, Australia for 17 years prior to recently taking up the position of Professor of Cancer Research at Monash University.

He was a founder of the Lorne Cancer Conference and a past Board Member of Cancer Trials Australia. He is the current Co-Chair of the Cancer Drugs Alliance and Interim Chair of the Australian Clinical Trials Alliance.  A past Board Member of the NSW Cancer Institute, past President of the Clinical Oncological Society of Australia, and a past Member of the Consultative Council of the Victorian Cancer Agency, he has received a Medal of the Order of Australia Award (OAM), the 2011 Cancer Achievement Award from the Medical Oncology Group of Australia and is the recipient of the 2014 Tom Reeve Award awarded by the Clinical Oncology Society of Australia.

Professor Zalcberg’s clinical research interests include gastro-intestinal cancer and health care outcomes. He has published more than 230 articles in peer-reviewed journals. He was a Principal Investigator for the EORTC advanced GIST trial in Australia and continues an active involvement in trials in this disease as well as other GI cancers. He continues an active clinical practice in GI cancer.

To be eligible, nominees must:

Each nomination must include:

Nomination of clinicians must include:

The recipient will receive:

The recipient will have an opportunity to deliver an address (up to 20 minutes) at the AGITG Annual Scientific Meeting in 2020 highlighting appropriate aspects of their area of interest, with the option to also be published in abstract form on the AGITG website and in the AGITG Annual Report.

Applications for 2019 are now closed.