Kicking Cancer in the Guts 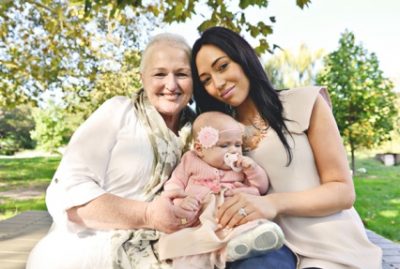 Kicking Cancer in the Guts

Having watched her mother fight gastro-intestinal cancer and hoping to find a cure for Australia’s most common cancer, Wollongong’s Kasey Vane will be sweating it out during a 9km run in the Blackmores Sydney Running Festival on 22 September to raise money for the GI Cancer Institute.

Kasey’s mother Anne Casey was diagnosed with gastro-intestinal cancer in October 2012 when doctors found tumours at the junction of her stomach and oesophagus. For four months she underwent several rounds of chemotherapy before she was due for a gastrectomy — an operation where the stomach is removed to stop the cancer from spreading.

“There were so many times my mum couldn’t handle it and just wanted to quit,” Kasey recalled.

But Anne found resilience after her daughter gave birth to her first beautiful grand-child, Ava. Unfortunately, the wonderful news of a new grandchild turned sour when doctors found an unexpected complication during Anne’s gastrectomy.

“The news could not have been more awful. They told us the cancer had spread to her liver and that Mum only had a few months to live,” said Kasey.

Although the future looked bleak, the Robinson family turned to the radical treatment of combining chemotherapy with Herceptin, a drug typically used to treat a type of breast cancer. Clinical trials have shown that Herceptin reduces the risk of death in patients with inoperable stomach cancer by 26%.

“I’ve raised $3180 and I hope that I can create more awareness about this horrible disease and help to find a cure,” Kasey said.

“I am so proud of my daughter Kasey and son-in law Tyler for taking on such a good cause. GI cancer is killing many Australians daily. Please get behind this good cause and support Kasey and Tyler with a donation to the GI Cancer Institute,” said Anne.

“Survival rates for GI Cancers are much lower than other well-known cancers. The donations I received help cancer patients like my mum get the best cancer treatments many years earlier than if the research was undertaken overseas,” said Kasey

“I am honoured to be a part of this amazing race and helping a great cause,” she concluded.