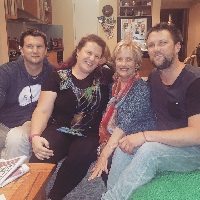 In recognition of Pancreas Cancer Awareness Month: 1-30 November we are shining a light on this important Gastro-Intestinal (GI) Cancer and the people living with pancreatic cancer.

59 year-old Linda Wilson was diagnosed with pancreatic cancer in June 2012. This is her story.

“I am a wife, mother of three, grandmother of 5 and a registered nurse. I am also a fishing fanatic! I love fishing from my kayak.

Back in 2012, I had some slight discomfort in my upper left abdomen and some heartburn. I was just not feeling quite right. A visit to my local doctor was in order and I was advised there was probably nothing to worry about.   I wasn’t convinced, so I was given a referral for an abdominal ultrasound, although I was told it was probably unnecessary.

Also, something else had been bothering me. My dogs had started sniffing at my mouth of a morning, particularly little Millie. She would just about be sticking her nose in my mouth. So, I went and had the ultrasound and that’s where it all started.

I had something on my pancreas. A CT scan was promptly ordered and within two days I was booked to see a surgeon. I had blood tests and a PET scan and these confirmed I had pancreas cancer.

My first thoughts were, ‘How long do I have to share my life with my wonderful family?’

My youngest son was studying medicine and I wondered if I would live to see him graduate.

I made a promise to myself that I was not going to waste one minute of the rest of my life being miserable.

I underwent a distal pancreatomy and a splenectomy, which took away the bottom half of my pancreas leaving the head in place. There was a 3 centimetre tumour which was contained with no lymph node involvement.

These were positive results! I received six months of chemotherapy. Follow up scans and tumour markers were all clear. Life looked promising.

Then, a few months later my tumour markers started rising and a lymph node ‘lit up’ on a scan. I had to know what this meant, so I asked the question, ‘How long do I have to live?’ I was reluctantly told I had between six and twelve months “if I was lucky”.

So I commenced a new type of chemotherapy. This was around the middle of 2013. It was time to take out some of my superannuation and fulfil some fun times with my family and friends.

I had always wanted to visit Kakadu, and I have had some fun fishing trips chasing that elusive barramundi. (It’s still elusive!) 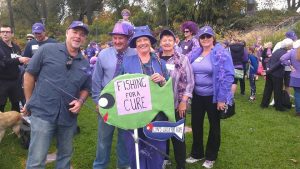 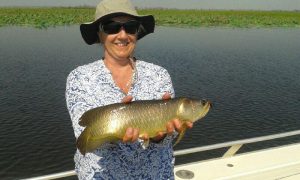 At the end of 2014 I had delays in chemotherapy treatment as my blood tests for neutrophils were low. Also, my tumour markers were rising. It was at this time that I was advised at a visit to the oncology clinic that my treatment was being stopped. When I asked why, I was told it was because I was not considered curable.

After further discussions including another oncologist, I recommenced chemotherapy with injections to help my bone marrow recover. I was advised it was time to change to another chemotherapy.

I had tolerated the chemo well. My tumour markers would rise if I had a break in treatment, which was necessary to enjoy some holiday time.

After a visit with an oncologist in December, blood tests and scans were ordered which were clear. But each time treatment stopped the tumour marker would start to rise.

I was referred to a radiation oncologist and in January 2016 commenced 30 rounds of radiation therapy to the lymph node area that lit up in 2013.

Hardly an hour goes by that I don’t think about it.   I have been able to stay positive. These days, if someone asks me if I would like to go and do something, then I do it. There is no time to waste we are all terminal from the moment we are born.

And you know that son who was studying medicine? He is into his third year post graduation! And I have seen another grandchild born. There have been some beautiful moments.”