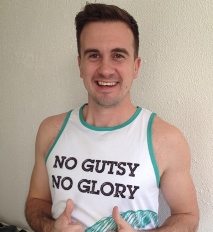 Gutsy spare-time boxer Matt Davies will take to the ring competitively for the first time at Sydney’s Hilton Hotel on October 11 — to raise money for GI cancer research.

Middleweight Matt has picked the GI Cancer Institute’s Gutsy Challenge as his chosen charity. It will certainly be a Gutsy Challenge for Matt, who admits “I’ve boxed or sparred for about five years, but never stepped into the ring at competition level.”

He points out that “All those participating are just ordinary people — male and female – who like fitness and boxing. It’s not too serious, we’re all just people with day jobs doing something gutsy!”

He admits “It’s definitely going to be interesting to get into the ring competitively for the first time — it’s going to be pretty intense, but I’m doing it for gastro-intestinal cancer research – so it’s a good cause.

“Boxing is a fighting sport”, says Matt, “but it’s very disciplined and technical — I really enjoy that.”

Our congratulations to Matt for his Gutsy effort. The event promises to be a knockout — not literally, we hope!

And for other ways to support the Gutsy Challenge …