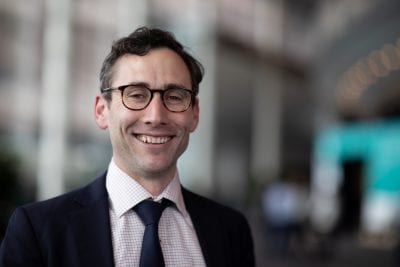 Dr Andrew Oar is a Radiation Oncologist and is currently the clinical research lead at Icon Cancer Centre Gold Coast and actively involved in several clinical trials. He is the principal investigator of the MASTERPLAN trial, which is investigating stereotactic radiation therapy and chemotherapy treatment for pancreatic cancer. He is actively involved in the AGITG, through his participation on the Upper GI Working Party and the Radiation Oncology Annual Scientific Meeting sub-committee.

Get to know Andrew, including how he found his way into Radiation Oncology, and which areas of GI cancer research he thinks hold the most promise:

What inspired you to become a Radiation Oncologist?

I did not grow up wanting to be a radiation oncologist. Even after finishing school, I studied a range of different things at university. I studied engineering for two years and eventually decided I wanted to be a dentist. After not too long on this path I changed to medicine. It was in my second year as a Junior House Officer on Orthopaedics (I wanted to be an orthopaedic surgeon!) that my registrar at the time quit orthopaedics to do radiation oncology. I looked into it and fell in love with it. Remains to this day, one of the best decisions I ever made.

What achievement are you most proud of?

Family. Sorry for the cliché but that’s an easy one.

Why did you become involved in AGITG?

I had a very supportive network during my training at Liverpool, Prince of Wales and Campbelltown Hospitals. And I always loved research. It was through my mentors around Sydney at the time (and there were many), that I initially became involved in AGITG. Also, very early on in my career, AGITG supported me with research projects including MASTERPLAN. With the relative early success of funding for the study, and early involvement in the Radiation Oncology Annual Scientific Meeting sub-committee, I became more and more involved. I am so frequently impressed with the commitment, knowledge and achievements of its members, young, old and older.

Are there any areas of GI cancer research that you believe hold the most promise for the future?

Personalised medicine. We are learning more and more about GI cancers every day, and not only that, the rate in which we are learning is increasing exponentially. I think with the advancement in technology, the significant reductions in costs of advanced technology, and our increasing knowledge of cancer biology and inherent differences between patients and tumours, it is a great time to work in the field of oncology!

Why did you choose to become part of the Upper GI Working Party?

I treat a number of anatomical sites in my day to day work. But the poor outcomes in upper GI cancer has always stood out to me. It is an area where there is much work to be done. I would like to be a part of that.

If you could have dinner with anyone, dead or alive, who would it be?

Leonardo Da Vinci. It is mind boggling (and perhaps unbelievable…….) that one person could have so many talents and so much knowledge.

If you could only eat one meal for the rest of your life, what would it be?