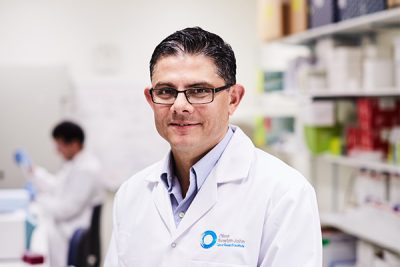 Professor John Mariadason is a Translational Scientist and is head of the division of gastrointestinal cancers at the Olivia Newton-John Cancer Research Institute, and the Director of Graduate research at the La Trobe University School of Cancer Medicine.

John is an active member of the AGITG and has been involved in a number of AGITG trials, including the current VADER trial. He is also a two-time recipient of the community-funded Innovation Grant.

We sat down with John as he shared with us his career achievements, how he became involved in the AGITG and who his dream dinner guests would be.

What inspired you to become a Translational Scientist?

What achievement are you most proud of?

We’ve been working on a class of drugs called HDAC inhibitors for almost 20 years. They target the epigenome, which is a change that cancer cells undergo. We always thought there is an opportunity for treatment by targeting that aspect of tumor cells. We’ve been doing a lot of pre-clinical work with these cells and finally this year we have received funding and approval to undertake a clinical trial involving these drugs through AGITG. To get to this stage is an achievement in itself, so I hope these treatments will benefit patients.

Why did you become involved in the AGITG?

When I was in the US, I worked closely with medical oncologists, so when I returned to Melbourne, I sort out that equivalent here. At the Austin [Health], I was lucky enough to team up with Professor Niall Tebbutt, one of the leaders of AGITG. That partnership allowed me to become involved and provide translational value to AGITG trials he was running. I then started to attend AGITG meetings and thought ‘this is a robust organisation and are very welcoming.’ The Group also wanted to strengthen translational research, so they gave me a chance to speak and present my work.

Are there particular areas of GI cancer research that you believe hold most promise for the future?

It’s an important question. One of the opportunities is in rational combination therapies, so using multiple drugs in treatment. Given the complexity of the cancer cells and the number of changes it undergoes, a great opportunity lies in the careful use of drugs that target different aspects of the tumor cells. A lot of us are working in this space and the current VADER trial is one of those efforts.

Why did you choose to become part of the AGITG Upper GI Working Party?

My expertise is more aligned to Lower GI, but there was an opening and an opportunity. They were looking for a Translational Researcher and I was eager to contribute my knowledge. The AGITG have been terrific to me and have supported Innovation Grants to my lab, so I wanted to give back. I also knew they were trying to incorporate more translational research into trials, so I could certainly contribute there.

If you could have dinner with anyone dead or alive, who would it be?

If I had to pick a scientist, I would have to pick Bert Vogelstein, the GI folks would know him – he’s a legend. He’s really emphasised the importance that cancer is a genetic disease and discovered the key driver genes in colon cancer. I’ve had fleeting conversations with him, but to sit down and really chat to him about his journey and his thought process would be fantastic.

But my non-scientist person would have to be Bono. He just seems like a decent guy so I would love to sit and have a chat to him, and if he would sing a few songs, that would be even better.

If you could only eat one meal for the rest of your life, what would it be?

I was born and grew up in Sri Lanka so rice and curries are a staple for us, and I could eat that every day of the year. So if I had to narrow it down it would be chicken curry and rice, with some veggies on the side.

What are your top three hobbies?

Learn more about our research