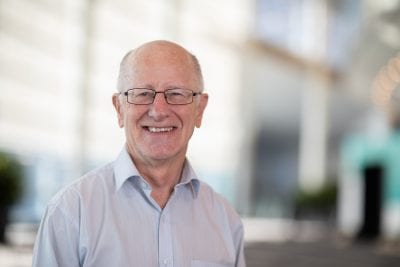 Professor Steve Ackland is a Medical Oncologist based in Newcastle, Director of Hunter Cancer Research Alliance, and Editor-in-Chief of Asia Pacific Journal of Clinical Oncology.

In the AGITG, he was a member of the Scientific Advisory Committee (SAC) from 1995 – December 2018, Chief Investigator on the Asymptomatic Metastatic Colorectal Cancer study (published 2005), and co-investigator on the T3 rectal study (published 4 times), the MAX study (published twice), and the GOFURTGO Study (published twice). He is currently the Australian Chief Investigator, together with Michael Jameson (NZ), of the SPAR study, activated in early 2018. He is passionate about conducting gastro-intestinal clinical trials efficiently and effectively, with timely activation and completion, and providing availability of infrastructure and clinical trials to Australasian oncologists.

How did you first get involved with AGITG?

I was involved in the formation of the AGITG. I was a minor party, but I do remember John Zalcberg, Bruce Gray, John Simes, Jim Denham and me at meetings before AGITG actually started.

I guess the reason is we thought it was worth doing coordinated, public good clinical trials in gastro-intestinal cancers. There were some new developments at the time and we had ideas about doing multi-site studies, and that therefore it was worth doing it through an organisation. At the time, the other cooperative group in cancer was the ANZ Breast Cancer Trials Group, which has existed I think since 1984 roughly. So AGITG was probably the second one.

In the almost 30 years since AGITG started, you have led a number of AGITG trials. Are there any highlights or trials you are particularly proud of?

I was trying to think about that earlier and I’m still scrolling through the trials that I’ve been involved in. The one I can remember most is the asymptomatic metastatic colorectal study.

Another one was what we called the T3 rectal cancer study which was a study of pre-operative radiation and chemotherapy.

The other people who we did work within oesophageal cancer was Brian Burnmeister in Queensland and Mark Smithers, both of whom are AGITG members, so that was quite a bit of work that Jim Denham largely pushed, which was published in Lancet Oncology in 2005 and that’s probably the biggest one. Also in 2005, we published the asymptomatic metastatic colorectal study with me as the first author, and that was in the British Journal of Cancer.

But the asymptomatic metastatic one was an interesting one because we worked out that the Canadians had the same thought at the same time and we elected to do two trials that were almost identical, one in Canada and one in Australia, and put the data together at the end. The end result was that if you started chemotherapy when the patients were asymptomatic, it didn’t make any difference to their quality of life or survival compared to watchful waiting and starting when they had symptoms.

I have to say the SPAR trial, which I’m currently involved in, is a bit similar to the asymptomatic metastatic colorectal cancer study because it involves cheap drugs and is not sponsored by a pharmaceutical company. And the asymptomatic colorectal cancer had a little bit of funding from the New South Wales Cancer Council, as I recall, and otherwise we ran it for nothing.

And I’d have to say, maybe I’m an optimist, but I think the SPAR trial might turn out to be positive. And if it does, then a fairly cheap treatment can add value to the treatment armament for rectal cancer and it’ll pave the way to studying statins in other diseases too, with radiotherapy and chemotherapy. So that would be worthwhile pursuing.

Are there any areas of GI cancer research that you believe hold the most promise for the future?

Yeah, I have to say molecular analysis, so understanding the molecular nature of GI tract cancers better and tailoring their therapy to the molecular abnormalities in the cancer, that’s one area.

The other one is pancreas cancer, which I think is similarly the epitopes of pancreas cancer tend to be hidden, because it’s a highly disease in the primary area, and if we can work out how to crack open pancreas cancer I think it’ll lead the way to using immune checkpoint inhibitors and other small targeting molecules in that disease. So I think in the next five years if we manage those, we’ll be doing a pretty good job.

How has the AGITG changed throughout your time working with the Group?

It’s gotten bigger, it’s gotten more complex. It’s an inclusive organisation, so anyone with an idea is welcome to present, and that’s why we have things like the New Concepts Symposium and Innovation Fund grants for people with innovative ideas that we’re willing to kick start. All of those things are important.

The other thing that changed very early on was the development of a fundraising arm, which is still called the GI Cancer Institute. It has been quite worthwhile because it’s a significant proportion of the income stream for the organisation and it does allow us to have things like Innovation Fund grants and fellowships and the like.

What are your hopes for the organisation over the next few years?

A: In a nutshell, an increasing national and international reputation, a continuing good mix of pharma company sponsored and public good studies, continued support by the community, manifest as involvement on consumers, involvement of scientists and donations from the general scientific and business community.

You have contributed to the AGITG’s work in a number of ways, not just as a Study Chair but as a Board director, member of the PAM&FR Committee and a member of the Scientific Advisory Committee. Why did you choose to take on these roles?

I’ve been a company director for fifteen years – this is the sixteenth year that I’ve formally been a director of not for profit companies. I’ve learned that as a company director you have to get involved. So there are other things that you need to do. And one of them from the company director perspective is subcommittee membership, and that is the way to get to know the staff and the organisation well.

So the reason I’m on the Public Affairs, Marketing and Fundraising Committee is because that’s not something I’m normally very involved with. I’ve learned things about how other members of the committee think about fundraising and its organisation. One area that I try and promote a little bit is the connection between members and potential donors. Because I think that connection is a good one to have. It inspires donors if they can identify with investigators in AGITG and what they’re trying to do, and investigators can learn a bit more about what the public want to see in the organisation and research.

The Scientific Advisory Committee, because that’s where you get to see all the new ideas, all the possibilities where we have discussions about strategy and priorities, scientific priorities, and how to enthuse a young person who has a great idea, and so on and so forth. It’s a learning as well as a mentoring and supervising-type role if you’re on that committee.

This year you are taking up the role of Convenor at the 2020 AGITG ASM. What has this role been like, and how is the ASM being adapted during COVID-19?

It’s been an interesting role because we’re setting up a virtual meeting and it’s good that we’re not the first organisation in our field to have done this. There’s already a bit of groundwork. TROG was probably the first group in Australia, the Trans-Tasman Radiation Oncology Group, because they ran their meeting at the end of March. We’re hopeful of doing something similar.

It’s been an interesting experience and I think it’ll be successful. We’re going from a face-to-face three day meeting to an online only one-day meeting. We’re going to fit it all into one day, so we’ll only have top priority stuff. There will be opportunity for posters, there will be opportunity for rapid-fire type presentations of clinical trials as well. I think it’ll be exciting and quite valuable for everyone who attends.

In 2018 you led the Gutsy Challenge through the Overland track. Why did you choose to take this on in addition to supporting the AGITG through research?

Well, I thought as a Director I should show leadership. I thought it was my turn to do something like that. I’m also getting a bit old and I thought it would be a reasonable test of my physical fitness, which I felt I passed.

It’s my first real personal effort at raising funds and I think I raised about $20,000 or something which wasn’t too bad under the circumstances.

How would you encourage other AGITG members to get actively involved?

A: I’ve only got five words. Dive in. The water’s fine. I don’t think there’s anything else you need. It’s an inclusive organisation, it promotes innovation and novel thinking. Anybody has a voice, every member has a vote, but anybody can voice an idea at a meeting, anybody can put forward an idea as a clinical trial. We will do our best to support people with innovative ideas and get them up to a level that is capable of being turned into a funded clinical trial.

Who have been your mentors throughout your career?

Several. Richard Schilsky, he was my supervisor and mentor when I did a fellowship in Chicago, my main one. The other two in Chicago were Everett Vokes and Mark Ratain, and I’d have to say in Australia the ones who inspired me were Alan Coates, John Forbes, and John Simes.

What book are you reading at the moment?

The book I’m reading at the moment is called Bad Pharma. It’s a good read, it’s easy to read and it’s relevant. It does reinforce the nexus as well as the divide between the pharmaceutical industry’s objectives, the medical professional’s objectives and the patient’s objectives.

What do you do for fun?

I ride motorcycles, play tennis and swim in the ocean.

Thank you for your generous donations