Memories of the Aconcagua Gutsy Challenge 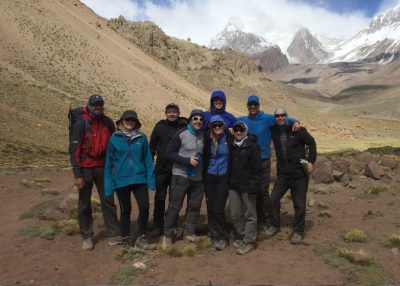 Memories of the Aconcagua Gutsy Challenge

Last year, the GI Cancer Institute’s Gutsy Challenge was the most ambitious ever, with eight trekkers climbing Mt Aconcagua, the highest peak of the Andes Mountain Range in Argentina. At an altitude of just under 7000m, Aconcagua is the highest mountain in the world outside the Himalayas. It is also highest point in both the Western and Southern Hemispheres.

“I wanted this Gutsy Challenge to be a genuine challenge,” says Associate Professor Niall Tebbutt, a medical oncologist, one of the eight team members who undertook the trek. “We knew at the beginning that the stats are that about one in four people who tackle it make the summit. We all knew we were doing something that was difficult.”

Each of the eight trekkers undertook serious training. Brie Jelbart, a clinical trials coordinator, began training as soon as she signed up, a year before the challenge itself.

“It was a lot of doing long hikes, and getting used to carrying a backpack,” she says. As the highest mountain in South America, Aconcagua is one of the world’s seven summits. All of the members practised hiking with weight, as well as general fitness training. Brie and Niall signed up for mountaineering training in the Snowy Mountains in preparation for using specialised equipment in more extreme weather. While they were training they met Jason Long, who was also planning on climbing Aconcagua.

“I’m climbing the seven summits, so we were on the same training course and planning to climb the same mountain,” Jason says. “After spending time with them and hearing what they were doing, I decided to join the team and raise some money.”

One of the main challenges the hikers faced was the effect of altitude. At 6,960m above sea level, the summit of Aconcagua is classified as an extreme altitude. The group members had to prepare to trek while their bodies were dealing with the lack of oxygen.

“Obviously there’s a limit to what you can do locally in Australia – the highest mountain in Victoria is 2,300m,” says Dr John Deadman, another member of the team.

Aconcagua is only 90km away from the coast. Weather on the mountain is unpredictable, and storms mean that it is often impossible to reach the summit. The Gutsy Challenge team climbed the summit the day after a snowstorm, which required endurance in the elements.

“The snow itself was in many places, about knee-deep, a metre deep or so,” John remembers. Despite the conditions, and having to make a trail through freshly laid snow, the team was able to reach the summit.

“In the end we all went higher than we’d ever been before,” says John. “There were beautiful views. You get to a level that is above the clouds, looking down at the valleys.”

Each member of the group says that the challenges of the trek were worth it for the sense of achievement they felt as a group.

“I kind of enjoyed every moment of it, to be honest,” says Jason. “Even the difficult parts were really rewarding.”

“The thing that I really enjoyed about it was that everyone got on so well,” says Niall. “I thought the team dynamics were fantastic and contributed to making it such an enjoyable event.”

The fundraising efforts of the Aconcagua Gutsy team were incredibly successful. Over $140,000 has been donated to the GI Cancer Institute. The team’s extraordinary achievements will result in more crucial research being undertaken, leading to better treatments for cancer patients in the future.