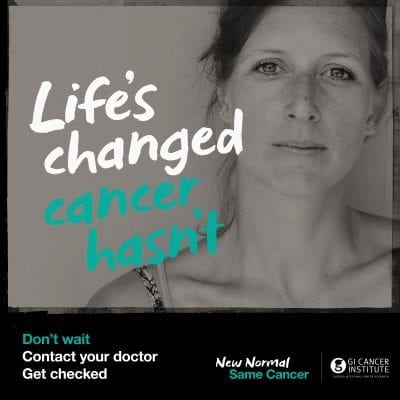 COVID-19 has profoundly affected healthcare nation-wide, and we have seen a significant drop in cancer screening, pathology and surgery.

In April, it was reported that cancer referrals at the Peter MacCallum Cancer Centre in Melbourne had fallen by a third compared to April 2019. At the Chris O’Brien Lifehouse in Sydney, they had fallen by 25%.

But cancer doesn’t disappear as a result of reduced screening or testing. It simply remains undetected – and when cancer is diagnosed at a later stage, it is more difficult to treat and survival rates decline.

And with around 28,600 Australians diagnosed with GI cancers each year and 39 Australians dying of it each day, GI cancer still is the most common form of cancer – affecting both men and women.

For some cancers, which are slow growing, it is unlikely there will be major consequences. However, for other cancers which grow quickly or are difficult to diagnose, early detection is critical. This includes several GI cancers, including stomach and oesophageal cancers.

What to do if you notice new symptoms

You can find out more about GI cancers and their signs and symptoms below:

If you are experiencing symptoms, or if something doesn’t feel right, consult your general practitioner on what to do next.