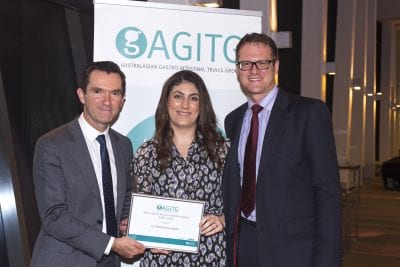 Dr Rosemary Habib has been awarded the 2018 Merck-AGITG Kristian Anderson Award for her research that could help unlock immunotherapy for colorectal cancer patients.

Dr Habib received an award of $36,700, equivalent to a year’s funding for her PhD research. She will study tumours for potential antigenic targets – molecules capable of inducing a response from the body’s immune system. She will identify specific chimeric antigen receptors (CARs), and then combine them to precisely eliminate tumour cells.

“Thank you to the AGITG, in partnership with MERCK, for awarding me the MERCK-AGITG-Kristian Anderson scholarship for my phD,” says Dr Rosemary Habib. “I am grateful for the opportunities this award will provide in allowing me to dedicate my time towards research. I will endeavour to improve on the current standard of care in colorectal cancer, a cancer of unmet need, by developing targeted chimeric antigen receptor T cells.”

Triggering this immune response has produced cures in otherwise incurable leukaemia and lymphoma, and Dr Habib’s research will investigate how it could be applied to colon cancer by testing CAR T-cells and then using them to target tumour cells.

Merck Australia Acting Managing Director and Regional Vice President Healthcare APAC, Andre Musto said, “Merck is very pleased to continue the company’s longstanding support for the Merck-AGITG Kristian Anderson Award. This is part of the company’s dedication to furthering clinical research in Australia and New Zealand. The award is important recognition of the legacy of Kristian Anderson and his family in the treatment and prevention of bowel cancer.”

Kristian Anderson (1975-2012) was diagnosed with cancer in his bowel and liver in October 2009, at age 34. He gained international attention in 2010 as a result of a video he filmed for his wife’s birthday. Anderson was interviewed on the Oprah Winfrey show alongside his wife, where he used his platform to raise public awareness of bowel cancer.

After his life was prolonged by cetuximab, a drug used in the treatment of advanced colon cancer, Kristian used his profile to successfully lobby the federal government to subsidise it to extend availability. After two years of extensive treatment, he passed away on 2 January 2012. He is survived by his wife Rachel and sons Cody and Jakob. He has left behind a legacy as the man who secured federal funding for cetuximab, which has improved the treatment of many colon cancer patients.

OXTOX fighting side effects of chemotherapy