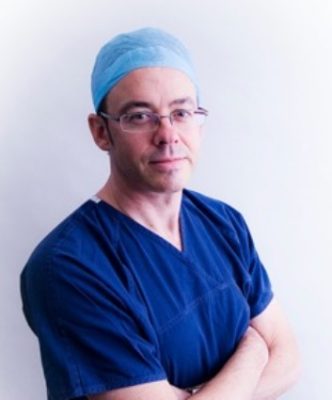 A new surgical clinical trial comparing robotic surgery to keyhole surgery for people with colon cancer has just opened in Australia. Led by Professor Andrew Stevenson, the trial, called RoLaCaRT-1, is now open at Cabrini Hospital and Peter MacCallum Cancer Centre in Victoria, Sydney Adventist Hospital and Prince of Wales Private Hospital in New South Wales, and The Queen Elizabeth Hospital in South Australia. It is opening soon at another five hospitals in Australia, two UK hospitals and at two Mayo clinics in the US.

Surgery for colon cancer was traditionally performed through open surgery, but laparoscopy (keyhole surgery) has been proven to have the same long-term survival outcomes as well as several advantages for the patient. These include shorter length of stay, less pain, early return of bowel function, early return to work, and less scarring and chance of hernias in the long term.

Professor Andrew Stevenson, Principal Investigator of the trial, believes that robotic surgery could improve these outcomes yet again.

“For the past twenty years, robotic surgery has largely been one for treatment of prostate cancer,” he says. “Newer versions of the robot are allowing us to do more complex operations involving the bowel.”

To accurately determine the benefits of robotic surgery compared to laparoscopy, Professor Stevenson and his team are using a new term, ‘successful surgery’. This will measure the number of patients who have surgery with no complications and are released from hospital quickly after their cancer has been removed.

“What we’re looking at is the number of times that patients will have successful surgery if it’s done robotically compared to laparoscopically,” says Professor Stevenson. “We suspect that there may be a 15-20% difference between those two groups.”

“It’s important that the surgery – which is still the main way of treating colon cancer, to remove it – is as good as can be performed,” says Professor Stevenson.

RoLaCaRT-1 has been developed following the results of the ALaCaRT study, which found that when laparoscopy was compared to open surgery for treatment of rectal cancer, the quality of surgery and overall success rate for both groups was excellent and of world standard.

The trial aims to enrol 50 people with right-sided colon cancer from 14 hospitals across Australia, the UK and the US.