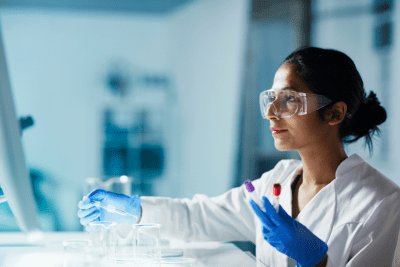 Since 1991, the GI Cancer Institute has been leading practice-changing clinical trials to improve treatments and survival rates for GI cancer patients. Survival rates have increased across the board, however there is still much work to be done to rid the world of these cancers.

Over the next 12 months, we look forward to opening a number of innovative new clinical trials to provide hope to people with pancreatic cancer, colorectal cancer and Gastrointestinal Stromal Tumours (GIST). Thanks to your support and the dedication of our researchers, we are hopeful for the future.

Survival rates are still tragically low for patients with pancreatic cancer, but recent developments have shown that doublet and triplet chemotherapy treatment can improve survival. The ASCEND trial, led by Dr Andrew Dean, aims to determine if the addition of CEND-1 to standard of care chemotherapy will improve patient survival. ASCEND will open soon to patients in Australia and New Zealand.

The innovative NEO-IMPACT pancreatic cancer study, led by Dr Lorraine Chantrill, is our first trial to be funded entirely by the community and philanthropy. Opening at the beginning of next year, this trial will introduce immunotherapy to the very beginning of treatment for pancreatic cancer patients to activate the immune system before any cancer cells are released from the pancreas gland into the blood stream. It has the potential to reduce the risk of recurrence, by influencing the person’s gut bacteria.

Many GIST patients are still at high risk of recurrence after completing the current standard treatment of three years chemotherapy and may benefit from additional therapy. The SSGXXII trial will compare extending this treatment to five years, versus the standard three years, aiming to prevent the tumour coming back. Clinical trials in rare cancers like GIST often require a global effort as patient populations are small. We look forward to Professor John Zalcberg leading this international trial here in Australia and bringing a new option to Australian patients with GIST.

Awarded the Best New Concept at last year’s Annual Scientific Meeting and a grant from Cancer Council Victoria, RESOLUTE aims to improve survival for patients with advanced colorectal cancer patients by adding local ablative treatment (radiotherapy) to standard chemotherapy treatment. Associate Professor Jeanne Tie who is leading the study hopes the trial will provide more evidence to help determine which patients will benefit from the radiotherapy.

Originating as an idea at our 2019 Idea Generation Workshop, the VADER trial will test the effectiveness of a drug called valproate which has been used to treat epilepsy and mood disorders for several decades. Professors Niall Tebbutt and John Mariadason are leading this study and hope to build on recent research that suggests valproate may help inhibit tumour growth. Thanks to community support through the Innovation Grant last year and a Medical Research Future Fund grant this year, this trial is now funded and will open to Australian patients next year.