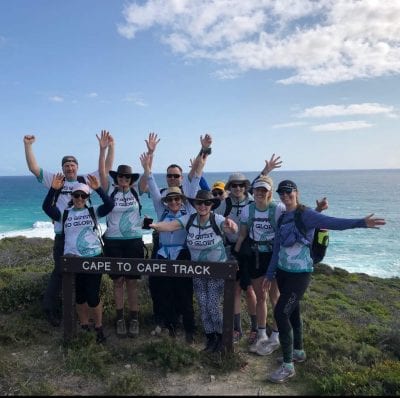 Old and new trekkers embark on the challenge of a lifetime

In September 2019, Dr Lorraine Chantrill led a Gutsy Adventure through the Cape to Cape track, which begins at an historic lighthouse in Leeuwin-Naturaliste National Park, 255km south of Perth. It travels south for 140km, finishing at the most south-westerly mainland point in Australia.

Dr Lorraine Chantrill is a medical oncologist and Director of the Gastro-Intestinal (GI) Cancer Institute. She and the team took on the track to raise funds for GI cancer research. The team came from across Australia and from all walks of life, but they were connected by one thing – a personal connection to GI cancer.

Jade Walker has taken on incredible challenges for the GI Cancer Institute before – last year she ran an ultramarathon, a total of 100km, in support of a close friend who was diagnosed with a GI cancer in 2017. During the ultramarathon, she remembered, “My mantra when I was struggling, running alone or hurting was, ‘I am privileged to see all this and do something so epic.’”

After the ultramarathon, signing up for more was a way of showing her support to her friend in the future.

Cape to Cape trekker Ross Hinscliff was also returning to the Gutsy Challenge. Ross trekked across Tasmania’s Overland track as part of last year’s Gutsy Adventure. His wife, Jeanine, was diagnosed with a GI cancer in 2014.

“Prior to Jeanine’s diagnosis, I hadn’t had a close relationship with anyone who had cancer,” he says. “Having someone close to you diagnosed was really eye-opening – particularly when you realise that for many, treatment options are limited and survival outcomes are poor.”

Trish Lawler threw herself headfirst into raising funds, even holding a Bunnings Barbecue with her friend and colleague Alison Winkelmeier.

“What I loved most about the Cape to Cape track was the beautiful scenery with breaching whales and carpets of wildflowers,” she says. “I chose to do the challenge to visit this beautiful part of the world and give back to the GI Cancer Institute.”

In 2017, Trish and Alison walked the Larapinta Track in the Northern Territory, also led by Dr Chantrill. They work together in the pharmaceutical industry focusing on oncology, and see the need for new treatments for GI cancers every day in their work.

For the Kedzior family the Cape to Cape adventure was a way to honour Deb Kedzior, who passed away from pancreatic cancer in October 2018 just 33 days after being diagnosed. Her husband Andrew and children Alexander and Sophie, and Alexandrer’s partner Melanie, suddenly faced life without her.

“We hope to raise enough funds to make a difference to somebody else’s wife and mum in the future,” said Alexander.

John Paduano chose to sign up for the Cape to Cape track in honour of his son Alex, who was diagnosed with bowel cancer in 2016. Alex was treated by Dr Chantrill for two and a half years before he passed away from the disease.

“Although we lost Alex, that doesn’t mean we need to stop supporting the critical research the GI Cancer Institute are doing,” he says. John was not able to join the rest of the team on the trek due to health issues, but this didn’t stop him from fundraising for the team.

After ten days of trekking and months of fundraising, this team of committed individuals has raised $101,311, beating their original target. These funds will go towards the Innovation Fund grant, which is awarded each year to fund an AGITG research study with the potential to impact clinical practice in the future.

In the past, the Innovation Fund has been awarded to studies designed to help bowel cancer patients recover more quickly from their symptoms and avoid invasive surgery, and find personalised treatment options for people when standard treatments fail. None of this research would be possible without the passion and hard work that fundraisers contribute.

Dr Chantrill emphasises the impact that these committed individuals make.

“The Cape to Cape Challenge was a very rewarding experience, particularly because it involved wonderful people all trying to make a difference,” she says. “To be able to do something like this in astoundingly beautiful coastal WA was just perfect.”

Caring for someone with GI cancer