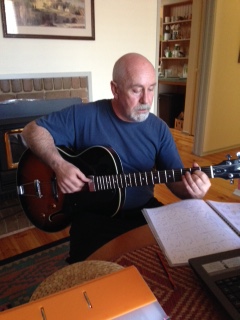 When Marc Askew first began to experience indigestion and difficulty swallowing, he assumed it was an infection he had caught in Southern Thailand. He was an academic and frequently travelled between Thailand and Australia for research.

His symptoms subsided with a course of antibiotics, but a few months later they returned, even worse than before. Marc’s GP referred him to a specialist, who thought Marc might have an ulcer. However, tests revealed a much more terrifying truth – Marc had a malignant tumour growing around his oesophageal junction.

“I remember the semester had just started,” says Marc. “I’d just begun meeting with my students and I had been putting in place all my plans for my own overseas research project. It was a massive shock.”

Reeling from his diagnosis, Marc was suddenly thrust into a confusing world of medical tests and treatments. Things became even more fraught when his oncologist, Associate Professor Niall Tebbutt, revealed that his cancer had metastisised into some of the lymph nodes, which meant surgery was not possible. It also meant his chances of survival were significantly reduced.

“I recall asking what the prognosis would be and being given a set of tables of survival rates,” says Marc. “I remember going home and seeing that it was around about nine months.”

Associate Professor Tebbutt referred Marc to a clinical trial called ATTAX. Marc could barely swallow and waiting for the trial was agonising, but he reasoned that, though there were no guarantees, it could be his best chance.

“What clinched it was the fact that I had confidence knowing that Niall was actually an active research oncologist,” he says. “He was more likely to be at the edge of investigating new treatments.”

Marc’s experience during his trial was one of the toughest challenges of his life. His side effects were severe. Despite the hardship, however, he could feel the treatment working over the six-month course of therapy. Tests showed that the tumour was shrinking.

After several years of follow-up tests and scans, Associate Professor Tebbutt told Marc he was confident that the tumour would not return.

Marc says he knows he is one of the lucky ones.

“The scale of my little miracle came home to me years later, talking with Niall. I feel fortunate to have survived, and very sad for those who did not,” he says.

Soon after completing treatment, Marc quit his job to travel with his partner and teenage daughter, and to concentrate on what he loved most about his work: researching and writing books. As he says, “I wanted to do what fulfilled me for the rest of my life.”

Some key stats on the need for research in to new treatments for oesophageal cancer, as well as the individuals it will impact include:

The need for research

Research in to new treatments is critical to improving outcomes for those diagnosed. GI cancers – like oesophageal cancer – do not receive the community support or research funding compared to other cancers, particularly when compared to the numbers of deaths they caused.

By funding research conducted here in Australia those diagnosed also have access to new treatments 3-5 years faster than if it was run overseas. Sadly, only 1 in 5 vital research projects put forward is able to be undertaken due to lack of funding.

We rely on community support. 100% of all donations made go towards research and support clinical trials – as our administration costs covered by sponsorship and grants. In addition your donation can be designated and directed toward a specific GI Cancer should you wish – for eg. Oesophageal Cancer Research.

Supporting a clinical trial provides an immediate impact – hope for those diagnosed and their families, now and into the future.

Why I am leaving a Bequest in my Will