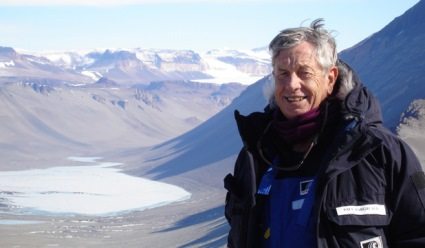 He was a leading businessman, co-founding ground-breaking IT company Datacom in the 1960s, which became one of the largest locally-owned IT service providers in the Asia-Pacific region.

The achievements of Paul Hargreaves extended far beyond boardrooms.

In 1991, he became a founding director of the National Institute of Water and Atmospheric Research and ended up as its chief executive.

The Antarctic became an abiding passion. He became involved in Antarctica New Zealand, appointed chairman in 2003.   Among his achievements was the establishment of the Hilary Field Centre, a windfarm at Scott Base and a new research laboratory on Ross Island.

In honour of his efforts, an Antarctic mountain – Hargreaves Peak — was named after him.

A cancer survivor, he was diagnosed with cancer of the tail of the pancreas in 2006 – doctors giving him no hope for survival. But he signed up for a new drug trial – which was successful, opening the door to surgery which saved his life.

In 2006, he was made an Officer of the Order of Merit for services to business and the community.

As well as co-founding the GI Cancer Instute New Zealand, he was a board member of Shine (Preventing Violence in the Home) and a director of Radio New Zealand.

Paul Hargreaves died on August 14 of a massive stroke — survived by his wife Anne and two children.

A tribute on the GI Cancer NZ website says in part:

“Paul became an inspiration to countless people affected by gastro-intestinal cancers. He openly and generously shared advice and encouragement to anyone who reached out to him in need of guidance. He was passionate about helping to fill the gap of credible information for cancer patients, something he and his family experienced following his diagnosis.”

“Paul was a man of great integrity and was extremely generous in his contributions to the GI Cancer Institute New Zealand.

“Paul will be missed by all his colleagues at the GI Cancer Institute New Zealand and the AGITG.”

Paul’s obituary in the New Zealand Herald and full report in The Press.