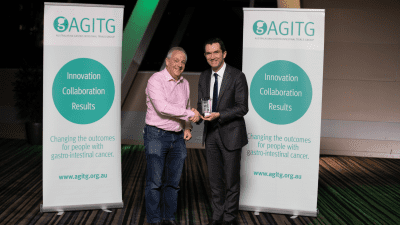 Professor Niall Tebbutt became the first AGITG member to be awarded the AGITG Fundraiser of the Year Award at the Annual Scientific Meeting in August 2019. Professor Tim Price, Chair of the AGITG (20113-2020), recognised Professor Tebbutt for his commitment to raising funds for GI cancer research for over four years.

Professor Tebbutt has led two teams on extraordinary fundraising challenges for the GI Cancer Institute, climbing Mt Kilimanjaro in Tanzania in 2015 and Mt Aconcagua in Argentina in 2017.

Collectively, the expeditions led by Professor Tebbutt have raised over $280,000 for gastro-intestinal (GI) cancer research and clinical trials.

When he was planning the Mt Aconcagua climb, he says, “I wanted it to be a genuine challenge. We knew at the beginning that the stats are that about one in four people who tackle it make the summit. We all knew we were doing something that was difficult.”

Professor Tebbutt is motivated for leading such incredible challenges as he sees the impact trials have on GI cancer patients first-hand. He is currently the principal investigator of the MODULATE clinical trial, a phase I trial for patients with metastatic colorectal cancer. He also leads LIBERATE, a study in follow-up investigating whether blood tests known as ‘liquid biopsies’ could evaluate RAS mutation status in patients with advanced colorectal cancer.

Earlier this year, Professor Tebbutt spoke about the role of fundraising and supporting AGITG trials as a member of the group, along with AGITG members Dr Lorraine Chantrill and Dr Matthew Burge.