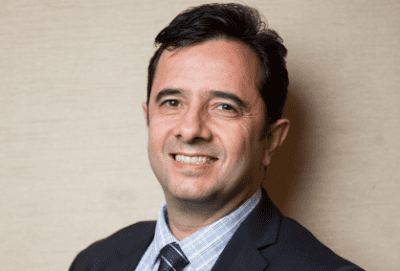 Inspired by the efforts of his colleagues, medical oncologist Professor Nick Pavlakis decided it was his turn to give back to the GI Cancer Institute and help his patients in another way. A decision that has now seen him awarded the prestigious 2021 Member Fundraiser of the Year Award.

Mt Kosciuszko was the first trek to take place since 2019, and Professor Pavlakis did a fantastic job leading the 18.5km round-trip hike to the summit of the mountain. The team of 60 braced the cold and foggy conditions to walk the trek, but their efforts weren’t in vain as they collectively raised a total of $155,000 for the Innovation Grant.

“As the leader I felt very much that this was a team, it had a good team spirit and I enjoyed talking to people along the trek, some of whom were patients, carers, friends, colleagues, doctors, and nurses, so this was a big social fabric that participated in this challenge,” Professor Pavlakis said.

“I had patients of mine on the trek that I actually had a chance to speak to at length, which doesn’t always happen in practice, so that was fun. There was good comradery and spirit all the way through, which made it very enjoyable.”

Besides treating GI cancer patients every day, Professor Pavlakis also conducts research and clinical trials, which he believes is the only way to improve the survival outcomes for people with GI cancers. This also means he understands the importance of the funding and donations from the GI cancer community.

“I was involved in the CONTROL NETs trial, which was almost exclusively funded through philanthropic funds, so I know just how important donations and raising funds is for research. I really value the community support and have always felt the needed to promote the GI Cancer Institute to my patients and relatives who were interested in supporting research.”

In order to raise as much funds as possible, Professor Pavlakis capalitised on patients and their families wanting to give back by advertising the trek in his practice and bringing together colleagues from his private practice and hospital to either participate in the trek or donate.

“My advice for those taking on a trek would be to talk about it early amongst a variety of people. You just don’t know who wants to participate. We had a variety of people across health, friends, family and other networks. You also shouldn’t be frightened of promoting what you do. I think a lot of us in medicine tend to be humble and focused on the job at hand. This is not about accolades, it’s saying that unless you actively promote your fundraising efforts, then you’re not going to generate many funds, so you have to put in the effort.”

While Professor Pavlakis appreciates the recognition and was surprised to have received the award, it was not his motivating factor for wanting to give back.

“I was just looking forward to the event itself and knowing firsthand what those donations can lead to is the greatest thrill I get from the whole thing. The accolade’s nice, but I think the achievement is the main goal and being a part of the team.”

As Principal Investigator of one of the AGITG’s biggest trials, Professor Pavlakis’ next goal is away from nature and back in the hospital, as he continues to lead the INTEGRATE IIb stomach cancer trial.

“INTEGRATE IIb is a major milestone for the GI Cancer Institute, and personally I feel privileged to be a part of the team. If the trial meets its expectations and we have a positive signal, then we would have developed something that will ultimately change practice and outcomes for stomach cancer patients.”

Congratulations once again to Professor Pavlakis on receiving this prestigious award. We know that he will continue to be make waves in the fundraising and research realms of the GI Cancer Institute.

Thank You for Your Support!