Recognising a pioneer during our 30th Anniversary

Each year, the John Zalcberg OAM Award for Excellence in AGITG Research recognises a member of the Australasian Gastro-Intestinal Trials Group (AGITG) who has made a significant and outstanding leadership contribution to AGITG research. As we celebrate the 30th Anniversary of the AGITG, the recognition of this member could not have been better timed.

We are proud to announce that Professor Mark Smithers is the 2021 recipient of the John Zalcberg OAM Award for Excellence in AGITG Research. As a founding member and pioneer of the AGITG, he has been a dedicated and committed member for the past 30 years. He has guided the development, conduct and reporting of many practice changing AGITG trials, which have been of benefit to GI cancer patients globally.

“I want to thank the AGITG leadership for deeming me suitable for this great award in the name of a really good friend, and I feel very chuffed and honored to receive this. John Zalcberg is a person I hold in the highest regard, and his leadership throughout the development and establishment of AGITG is one of the reasons the organisation is so strong. To have an award in his name is truly a great honour,” Professor Smithers said.

As a young consultant interested in surgical oncology and GI cancer, it was clear to Professor Smithers that his patients often required more than just an operation. After being told about this national group that was forming (later becoming the AGITG), joining that group was one of the sliding door moments of his career.

“We wanted to focus on making things better for patients, so we worked together to develop protocols based on excellence in research. We increased our knowledge of trial establishment, and how we could all work together, with the same aim of patient benefit. This became the backbone of the AGITG. Trial development has matured and evolved enormously, and it’s amazing to have been a part of that and reflect on what’s going on now.” 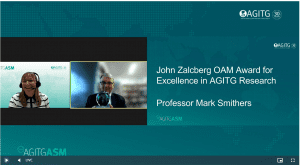 Committed to changing outcomes for GI cancer patients, Professor Smithers has been actively involved in several AGITG clinical trials, including Co-Chief Investigator on the IG9401 clinical trial. This randomised phase III clinical trial compared surgery alone with concurrent preoperative chemotherapy and radiation followed by surgery alone for resectable carcinoma of the oesophagus. It was an important component of a definitive meta-analysis reported by the AGITG team and Professor Smithers, reporting preoperative chemo-radiotherapy to be associated with a significant survival benefit when compared with surgery alone.

Most recently, Professor Smithers was Surgical Lead of the global TOPGEAR trial, assessing the role of preoperative radiotherapy for resectable gastric cancer. This multidisciplinary study involved the collaborative efforts of radiation oncologists, medical oncologists and surgeons to determine best combination of chemotherapy, radiotherapy and surgery to improve cure rates.

His involvement in different aspects of the organisation, including Scientific Advisory Committee, Upper GI Working Party, and Surgical Committee member and Chair, has been a highlight for Professor Smithers, as he reflects on the AGITG’s ability to see the bigger picture.

“Being part of an organsiation focused on patient outcomes on a bigger scale has been a privilege for me. I’m really into team sports so being part of each of the components of AGITG, knowing what we’ve been able to achieve has given me the ‘warm and fuzzies’ when I reflect on my career. I know it’s a cliché, but I really do feel I am a better, person, doctor, clinical trial lead and surgeon having been part of AGITG. To have seen the international connections which have been established and to have the best of the best come to speak at our meetings, those are the highlights for me.”

Having witnessed the past 30 years of AGITG history, milestones and achievements, Professor Smithers holds high prospects for the future of the organisation.

“AGITG is clearly the premier GI oncology group in Australia and New Zealand and continues to be recognised as such, as the group is constantly exploring gaps in the knowledge and evidence. I would like to acknowledge the leadership and stewardship of AGITG CEO Russell Conley, who, I think, stepped in at the right time to assist and take us to another level.”

Congratulations once again to Professor Smithers on this remarkable achievement, during our 30th anniversary celebrations.