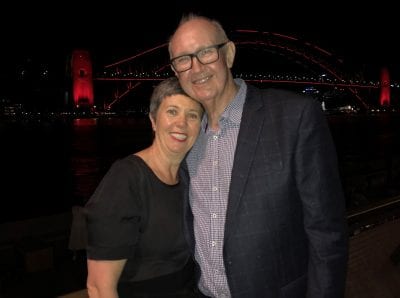 Michelle met Bill for the first time in her own backyard. She was living with a friend, who worked with him at the ABC in Perth, and invited him to a party they were having at their house. It was 1990, and the beginning of a beautiful 30-year relationship.

Michelle and Bill led busy lives; Michelle was the CEO of the Australian Energy Regulator, and Bill worked as an English teacher as well as a film and music reviewer for ABC radio.

Things changed at the beginning of 2018, when Bill began to feel unwell.

“He would describe it as a little bit off his seed, under the weather,” Michelle says. “It was like he got a bad flu and never quite recovered.”

Bill was conscientious about his health, and although nothing was obviously wrong, he sought advice from his GP. After some tests, the results came back showing that Bill had liver cancer. They were both shocked by the news.

“I remember when Bill told me – he was out on Colins Street, he was reeling and rang me. I was in Brisbane at the time, and I got on a plane straight away and came home. Once we’d found out, things began to happen pretty quickly,” Michelle remembers.

“Bill had some quite large tumours in his liver but it had progressed, including to a couple of spots on his lungs. It had progressed quite far. He started off with chemo straight away.”

In this way, Bill’s story is similar to that of many people who are diagnosed with liver cancer. It is a difficult cancer to detect at an early stage, particularly if there is no prior damage to the liver. The symptoms are often not clear and there has been little research into how to detect it early.

Although both of their lives had drastically changed, Bill was still feeling well while going through treatment and the chemo seemed to be shrinking his cancer. He was able to keep up with many of the things he enjoyed.

“He always loved music so he did a lot of reading about music, he’d listen to a lot of it. He loved all music and had very broad tastes,” says Michelle. “He was a good photographer and he had taught photography as well, so he used to take lovely photos and he could paint and draw.”

In early 2019, Bill’s blood tests showed that the chemotherapy had stopped being effective. He tried another chemotherapy treatment, but there were few options available and it soon became clear that the new treatment was not shrinking his cancer.

“He began to deteriorate quite quickly. In about the third or fourth week of March he stopped chemo and then it was really just waiting to see how much time he had left. We didn’t know,” Michelle remembers. Bill passed away in May 2019.

“We knew a lot of people with experience of cancer, but not of liver cancer,” says Michelle. “Generally their experience was that people went through treatment and if you were responding well to treatment, a lot of people were cured or they lived for quite a long time. So this one was quite shocking for all of us because it was terminal and we were told that right from the beginning. Average life expectancy from diagnosis was 6-12 months.”

Michelle has chosen to share her experience to raise awareness of liver cancer and the need for more research in the future. By developing better methods for early detection and treatments for liver cancer, she hopes that others will be spared from what Bill experienced.

“My hope is that there’s more research into it in the future. It would be good if there was a greater understanding of liver cancer,” Michelle says. “Research around detection, and a test that might help GPs to pick up the warning signs a bit earlier.”

We can’t thank Michelle enough for sharing her story with us and helping to raise awareness about liver cancer.

Early stages of liver cancer are rarely detected as they may not cause symptoms or only show in the form of non-specific symptoms. Most diagnoses occur when liver cancer becomes advanced. Symptoms may include:

If you experience any of these symptoms or have concerns, please contact your general practitioner (GP).