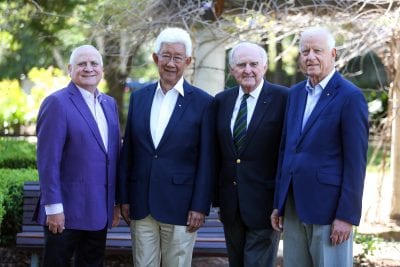 The husbands of four women who lost their lives to pancreatic cancer have joined together to raise awareness of the need for better treatments.

While the five-year survival rates for breast cancer, prostate cancer and melanoma are all over 90%, five-year survival for pancreatic cancer is just 11.5%. Dr Frank Cheok OAM, Mark Bethwaite AM, Tony King and Daniel Goulburn OAM are calling for more attention to be paid to this rare and neglected disease.

The story of their families has a long history. Frank and his wife Mee-Na knew Tony and his wife Lyn for over 20 years – the couples played golf and travelled together. Fifteen years ago, when Mark began playing golf with Frank and Tony, he and his wife Caroline quickly became friends with the others.

Lyn first noticed something was wrong on an overseas trip with her grandchildren. Originally thinking that she had gallstones, tests revealed the worst – pancreatic cancer.

Even with such a devastating result, Tony remembers, “I was confident that she would beat cancer. Even when the palliative care doctor spoke to us and said, ‘I think she’s only got seven to nine days to go,’ I thought to myself, ‘He’s wrong. This bloke’s wrong. He doesn’t know what Lyn’s like.’”

While Lyn was in hospital, she saw Caroline – the two realised that they were being treated for the same disease.

“Caroline’s diagnosis came as a shock,” Mark remembers. “That such a fit, active, non-smoking person had been diagnosed.”

“There isn’t a day that goes by that I don’t think of her,” he says. “There are very few positives that came out of this, but one positive was that by the end of that time, Caroline could be in no doubt of the love and support that she had from a wide cross-section of friends, who radiated back at her all of the warmth that she had previously radiated out to them.”

Lyn passed away on 20 July, around 8 months after her diagnosis, and her funeral was held on the 27th. On that day Mee-Na, Frank’s wife, was admitted to hospital – also for pancreatic cancer.

“The night we were told Mee-Na had pancreatic cancer it was devastating,” says Frank. “Strangely, the first thing she said to me was, ‘Will you play at my funeral?’

It was terrible – she hadn’t even started treatment yet, and she was talking about the funeral. The time of diagnosis to time of death for us was four and a half months.”

When Daniel met Frank, Mark and Tony later, he realised that their family’s experiences mirrored his. His wife Rochelle had also passed away from pancreatic cancer just a few months after a sudden diagnosis.

When he was told that Rochelle had pancreatic cancer, he remembers saying, “What’s a pancreas?”

Now Daniel is a strong advocate for pancreatic cancer and the need for research to improve outcomes for the 3000+ Australians diagnosed every year.

After their families’ experiences, this is something that all four men emphasise.

“The awareness is just not there, I don’t want anyone to suffer like we did.” says Tony. “Increased awareness and funding for research into pancreatic cancer is going to lead to new protocols and clinical trials and hopefully better treatment which will raise survival rates.”

These four men understand all too well that more awareness about pancreatic cancer has to be a good thing and encourage others to get involved and help where they can this November and beyond.

You can change the odds

Any donation, no matter what size, will help us to conduct clinical trials that lead to better health outcomes for people diagnosed with pancreatic and stomach cancer. 100% of your donation will go towards research, and you can select the cancer type your gift will go towards.

Thank You for Your Support!