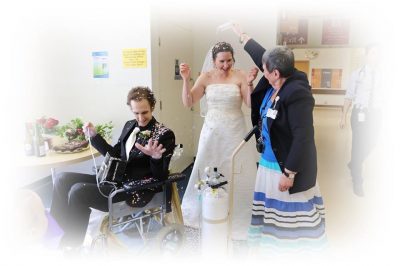 Ruth’s Bequest is in memory of her late husband, Lance, who passed away from oesophageal cancer in 2013.

Lance’s illness was not recognised as oesophageal cancer until he had been unwell for around six months, as is the case for many people. In January, shortly after he and Ruth were engaged, he started to feel unwell.

Early detection of oesophageal cancer is difficult, as often there are no symptoms, or symptoms are vague. Researchers are studying new ways to detect oesophageal cancer early, when it can be effectively treated, but this research is in the early stages.

“Fortunately we had a really good doctor who kept chasing it,” Ruth says. Finally, when tests revealed that Lance had another condition called retroperitoneal fibrosis, doctors conducted an endoscopy. They discovered a six centimetre tumour on his oesophagus and the top of his stomach.

Ruth remembers, “We were just told from the start, there’s no treatment.” The current five-year survival rate for oesophageal cancer is just 22%, and survival outcomes are lower for people who are diagnosed when the cancer is already advanced. There are few effective treatments for advanced oesophageal cancer.

Faced with devastating news, Lance and Ruth made plans – as Lance’s cancer progressed, they moved their wedding forward. They were married in the palliative care ward of Westmead Hospital. He passed away two days later.

Ruth’s decision to include a Bequest to the GI Cancer Institute for oesophageal cancer research in her Will is motivated by a desire to help others in the future, one which she and Lance shared.

“When friends of his asked Lance what they could donate to, he said research, so no other bastard has to go through this,” she remembers.

It was important to her to give to oesophageal cancer, as it is a relatively rare cancer, and lacks funding for research which could lead to better treatments.

“I’m hoping that there can be some progress, and hopefully one day, no one will have to go through what Lance and I did,” she says. By giving to research to improve early detection of oesophageal cancer and its treatment, she is giving to others in her position in the future, leaving a legacy in Lance’s memory that will give hope to people with oesophageal cancer when they need it most.

Leaving a gift in your Will, whether large or small, can make a real difference. Your support enables cutting edge research into new treatments that will benefit GI cancer patients and their families beyond your lifetime.

For a confidential conversation to discuss leaving a gift in your Will for GI Cancer research, please contact Nicky Lancaster, Philanthropy Manager, on 1300 666 769 or send an email to nicky@gicancer.org.au.