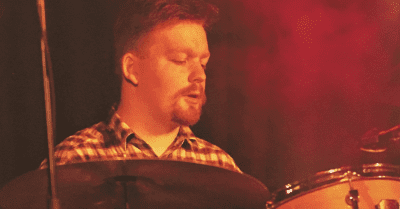 Tonya and Richard were high school sweethearts. They were brought together by their shared love of music; Richard was a drummer in his school band, and Tonya played the flute in hers. After they graduated, Richard kept making music, working as a sound engineer and a sessional musician in Geelong, their hometown. Tonya worked as a teacher before they welcomed their two children.

In 2009, everything changed overnight.  While celebrating at his younger brother’s wedding, Richard started to choke on his food. It quickly became clear that something wasn’t right, and he and Tonya sought medical help. Tests revealed he had stage four stomach cancer.

“There were no real symptoms except heartburn, and he’d always had a bit of heartburn, so it was a huge shock. We weren’t expecting it at all,” Tonya says.

At first Richard planned to have surgery and chemotherapy treatments, but Richard’s cancer spread quickly, and it soon became apparent that these treatments would not be effective. He began palliative care treatment and passed away in June 2010, just seven months after his diagnosis.

“I’d had friends that had passed away from cancer, but not stomach cancer,” Tonya says. “He was only 35. The oncologist we had was only a couple of years younger than him. It’s not known as a disease that younger men get, and obviously with little or no symptoms it’s really difficult to diagnose early on.”

For Tonya, the experience was also a learning curve, of grieving the unexpected loss of her husband.

“I think I did a lot of my grieving while he was sick, because we knew what was going to happen,” Tonya says.

“Because Richard was so young, a lot of my friends hadn’t heard of stomach cancer, but it has a really high mortality rate,” Tonya says. She also began to reach out to other young widows to create a support network that did not exist when she lost Richard.

“As a society, we don’t talk about grief enough. It happens to all of us and we’re still not comfortable talking about losing someone we love. I’ve recently started a group for young widows with kids, and they’ve found it helpful talking about their experiences with people who get it,” Tonya says.

The only way to make a difference for people diagnosed with stomach cancer, from Tonya’s perspective, is through research that can improve early diagnosis and develop better treatments.

“Research is one of the hidden things, that’s where the miracles happen. It’s so important to test the new treatments, because that’s the thing that makes a difference.”

You can find Tonya’s support group, Lighthouse Friends, on Facebook.

November is Stomach Cancer Awareness Month. Find out more about how you can support stomach cancer awareness this month at gicancer.org.au/cancer/stomach-cancer/