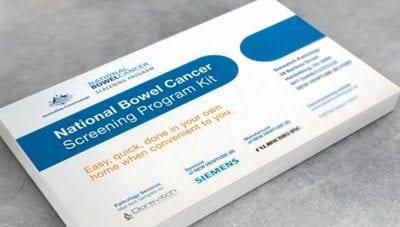 Bowel cancer screening has an exceptionally favourable benefit-to-harm balance, according to new research published in Public Health Research & Practice, a journal of the Sax Institute.

This information comes from a comprehensive review of the benefits, harms and cost-effectiveness of cancer screening in Australia. It was written by senior author Karen Canfell, Chair of the Cancer Screening and Immunisation Committee at the Cancer Council. It used quantitative evidence and the most recent estimates.

It found that Australia’s screening programs for breast, cervical and colorectal cancers are all cost-effective, with benefits substantially outweighing harms for the latter two cancers.

Colorectal cancer, also known as bowel cancer, occurs when malignant cancer cells grow in the wall of the large bowel, including the large intestine and rectum.

The National Bowel Cancer Screening Program is free for Australians aged 50-74. It uses a screening test called a Faecal Occult Blood Test (FOBT), which determines whether a person needs to have a colonoscopy to rule out colorectal cancer.

Click here to read the full report on the benefits, harms and cost-effectiveness of cancer screening.

Click here for information on our clinical trials for people with colorectal cancer.

Highlights from the ASCO Annual Meeting