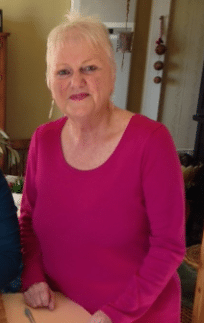 Susan Netherclift: “The trial has given me hope”

Susan Netherclift noticed problems with her health in 2008. She was 60, and caring for her elderly parents full time after retiring from her career in public service. At first she had high blood pressure and abdominal discomfort, but her symptoms escalated until she was getting excruciating spasms every time she ate.

Susan suffered a haemorrhage and was rushed to hospital. One week later she had emergency surgery to remove a tumour from her small intestine.

After surgery, Susan was diagnosed with neuroendocrine tumours, known as NETs. NETs is a rare form of cancer that emerges in the neuroendocrine system, a network of glands and nerve cells that produce and release hormones into the bloodstream.

“All I remember thinking is, ‘what’s mum and dad going to do?’ That’s all I thought of at that time.”

NETs is incurable – Susan has been living with this cancer for ten years.

“With NETs, it affects people for years,” says Susan. “My daughter has stood by me the whole time that I’ve been going through this. I’m very aware of how it affects the family. It’s hard to put into words, actually.”

In her ten years with NETs, Susan has undergone three surgeries as her cancer has progressed.

“My surgeon said to me it’s like a weed. It can pop up anywhere and it does. I was told it was slow growing, but incurable – basically, I knew that it would just keep coming back.”

The standard treatments for NETs stopped working as Susan’s condition continued to progress. Tumours were spreading into her pelvis, ribs, lungs, and around her pancreas. Her oncologist, Dr Desmond Yip, referred her to the GI Cancer Institute’s CONTROL NETs trial.

“I felt really relieved that something was actually being done,” she says. “After experiencing the condition for nine years I felt for the first time that there was a possibility of doing something to help my situation.”

On the CONTROL NETs trial Susan was treated with chemotherapy and a radioactive treatment known as ‘radiopeptide’. The radioactive particles in this treatment bind to receptors on tumour cells and kill them. While being treated with this new combination of treatments, Susan’s cancer has not progressed.

“There are so many more opportunities now, and treatments, that I truly believe there is a cure out there for it,” she says. “It just needs people to know about it.”

Click here to find out more about the CONTROL NETs trial.

The latest research from ASCO at the Living Room Series