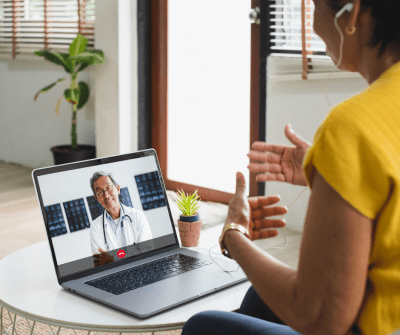 Imagine if the barriers for accessing clinical trials, such as location and distance, were removed. Cancer patients across Australia would have access to potentially lifesaving treatments. With at least one-third of the population located regionally, there are many patients that do not have access to the latest treatments and trials. The ultimate success for clinical trials will be achieved when all Australians have equal access, and the answer is simple, rolling out tele-trials.

Medical oncologist Dr Robert Zielinski is the Director of Clinical Trials Unit at Orange Hospital in regional NSW. He believes tele-trials are about placing patients at the centre of the trial design and activity.

“Traditionally, patients would travel to the centre running the trial, and tele-trials are obviously trying to flip that around by bringing the trial to the patient, as close to their home as possible. We’re basically leveraging telehealth functionalities, including video conferencing, electronic medical records and telephones to bring a clinical trial to the patient,” Dr Zielinski said.

While this model has been utilised for some time, Dr Zielinski believes the COVID-19 pandemic accelerated the use of tele-trials, by simplifying governance, and rapidly enhancing their applicability, acceptability and appeal.

“COVID-19 disrupted the traditional trial model so much that sponsors were worried trials weren’t recruiting or able to follow the protocols. The pandemic has given us the opportunity to present sponsors with an alternative model and adopt it as a standard of care for future trials. COVID-19 has been a blessing for tele-trials as it has helped enlighten metro investigators to the benefits and ease of using telehealth to assess patients.

AGITG has successfully initiated the Clinical Oncology Society of Australia (COSA) Tele-Trial Model in several GI cancer trials, one of which is the ASCOLT colorectal cancer trial. The ASCOLT study’s primary site is in Orange Hospital, NSW with a satellite site in Dubbo Hospital. While reaching its patient enrolment target in June 2021, the team have enrolled 10% of their trial target from the surrounding areas. This also includes Aboriginal and Torres Strait Islander patients, which is an underrepresented group in clinical trials.

“By accessing a greater population, clinicians can recruit sooner, close their trial quicker, complete analysis and use the new research to benefit the cancer community.”

The benefits of tele-trials however extend beyond patient recruitment, according to Associate Professor Craig Underhill, Clinical Director of Division of Cancer at Albury Wodonga Health.

“Other benefits include increased equity of access for regional and rural cancer patients, increased recruitment for rare cancers, and especially collaboration and networking between regional and metro centres,” Dr Underhill said.

An advocate of tele-trials, Dr Underhill was appointed the Victorian Comprehensive Cancer Centre (VCCC) Alliance Regional Oncology Lead in 2017, and now plays an active role in the championing of VCCC Alliance Tele-trial Program.

“Of the 1,600 people on clinical trials in Victoria in 2017, 400 were rural residents but only 80 participated in a clinical trial in their own city. The other 320 had to travel to Melbourne to access a trial. How many people turned down the opportunity to travel for a trial as they were too sick, or it was too hard? We will never know,” said Dr Underhill.

However, a 2020 health economics review of the VCCC Tele-Trials Program found the travel distance of regional patients on the program had to travel was no longer statistically different to metro patients.

“The first tele-trial conducted within the VCCC Tele-Trial program recruited 150 patients in regional Victoria, almost double the previous annual rate with one trial.”

While some of the perceived challenged by sponsors may have been factors such as feasibility, source documentation, budgets and monitoring, these have been addressed in the COSA Tele-Trials Model.

“The COSA Tele-Trials Model sets out the same principles of study conduct, regulation and management are implemented of a traditional trial, but in a remote setting. Data management and the process of ensuring the transfer of reliable sources documentation to primary sites was seen as a major problem pre-COVID, but now the process has been able to switch to accommodate remote monitoring.”

“I think sometimes the term ‘tele-trials’ might confuse people and we over think it. It’s a flexible model, using telehealth to conduct parts of a clinical trial. It could be seeing patients, training and supervising collaborators at other sites, or conducting remote monitoring. The pandemic has proven the safety and benefits of this model. Moving forward we are utilising funding from the Medical Research Future Fund to increase capacity and conduct health services research across regional Victoria using telehealth models. It is an exciting time for trials in the regions.”

In the end, it is the patients who will benefits the most from a tele-trials model. Location significantly disadvantages a population who need to be close to their businesses and their loved ones, especially during difficult times. And for those that chose to take on clinical trials in metro locations, their quality of life is greatly impacted. For instance, a past patient of Dr Zielinski travelled the circumference of Australia one and a half times, just by traveling to Sydney for a trial for 28 months.

“There are widespread benefits for the industry, the healthcare system, the clinicians but especially the patients, because it is heartbreaking as a clinician to say to a patient ‘I have no more therapies for you and it’s logistically impossible for you to access a trial in a city’, so tele-trials do give patients hope,” said Dr Zielinski.

Early in 2022, the AGITG will be sending a survey to clinicians in order to capture the greater use of tele-trials amongst AGITG members and the likelihood using this model in the future. Please help by completing the survey so we can continue to provide equal access to lifesaving treatments across the country.