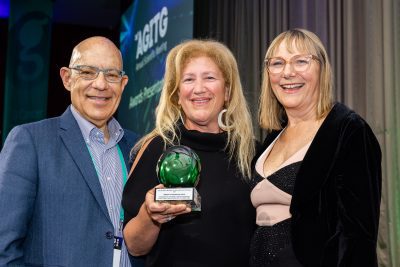 We are excited to announce that the 2022 John Zalcberg OAM Award for Excellence in AGITG Research was awarded to Prof Eva Segelov.

Her significant and outstanding leadership in AGITG research for many years was recognised at the 24th AGITG Annual Scientific Meeting in Melbourne, where she was presented with a trophy by AGITG pioneer and award namesake Prof John Zalcberg alongside AGITG Chair Prof Lorraine Chantrill.

“I accept it on behalf of all my peers and particularly women in clinical trials research. It’s only been very recently that women were actually leading the research so I’m very honoured to accept this award and very grateful to AGITG for the recognition.”

Prof Segelov was a trailblazer among AGITG members and a champion for gender equity in clinical trials research. She held the role of Australian Study Chair for a range of influential international studies, including ICECREAM, ASCOLT, QUASAR2, SCOT and InterAACT.

“My proudest moment was presenting the ICECREAM trial in an oral presentation at ESMO – really, that was on behalf of all the patients who contributed and all the investigators,” she said.

Prof Segelov played a pivotal role in the development of the AGITG as an internationally recognised multidisciplinary collaborative group, including among clinicians, researchers, patients and patient advocates.

“The nomination was by two of the consumers [members of the community], so I was particularly proud of that,” she said.

She co-founded an international collaborative research group, CommNETs, comprising a partnership of researchers, patients and community in pursuit of neuroendocrine tumour (NET) research.

“I would say to young people – younger than me – don’t be frightened. Just step ahead and never be frightened. If somebody gives you feedback on your ideas, that can only make it better,” she said.

“The beauty of AGITG is that it’s a very long-term relationship and you can be more involved at times, less involved at others – it’s not a one-off.

“With your peers, you go through it as a whole cohort. You nurture young people, you learn off mentors like John Zalcberg, John Simes and David Goldstein, many, many people. In that way it’s sort of like having a big family there and that’s just a wonderful opportunity.

“There are major changes in the way we’re doing trials now: new trial designs, teletrials, registry trials – lots of things happening. AGITG has been very nimble in adapting to that. My wish is that we stay on the forefront of that – be a very diverse and welcoming group – and that everyone gets the same opportunity that I had.”

The in-person Annual Scientific Meeting is back with record numbers

Congratulations to winners of the 2022 AGITG awards at the ASM