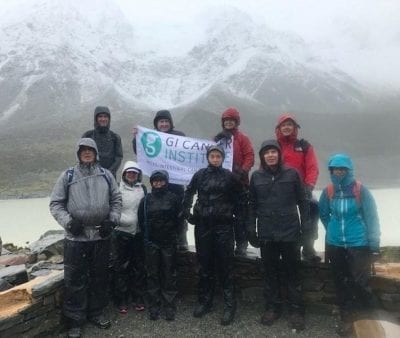 Because of your extraordinary generosity, the GI Cancer Institute has raised record funds for research this year. Our team of six Gutsy people, led by GI Cancer Institute Chair Professor Tim Price (2013-2020), have raised close to $50,000 on a seven-day mountaineering expedition, and they want to say thank you!

Our Gutsy Challenge team trekked through New Zealand’s Southern Alps, motivated by the support of GI Cancer Institute contributors like you.

“Our main goal was to raise money for our current patients and those we have lost,” says Tim.

The team took on an extraordinary challenge, trekking through over 70km of New Zealand’s spectacular mountain ranges to raise awareness and funds for GI cancer. Everyone who participated in the Gutsy Challenge in 2019 contributed to a growing community of supporters who have gone above and beyond to improve outcomes for GI cancer patients.

This is echoed by Ross Hinscliff, who also took part in a Gutsy Challenge this year after the recent loss of his wife, Jeanine, to a GI cancer. Ross says that the support of people like you means a lot.

“Prior to Jeanine’s diagnosis, I hadn’t had a close relationship with anyone who had cancer,” he says. “Having someone close to you diagnosed was really eye-opening – particularly when you realise that for many, treatment options are limited and survival outcomes are poor.”

Ross joined the Cape to Cape Gutsy Challenge in September led by Dr Lorraine Chantrill, trekking 100km along the coast of Western Australia to raise funds for better treatments for other families affected by GI cancers.

The unparalleled generosity of our Gutsy Challenge participants and supporters has resulted in two additional Innovation Fund grants of $200,000  to be offered next year. For the first time, three new research projects will be guaranteed funding next year – which would not have been possible without your support.

One hundred percent of your donations to the Gutsy Challenge participants are funding vital research, and for the people taking on the challenges, this makes all the difference.

“GI cancer is the poor cousin at the moment,” says Professor Price. “We need to get both awareness and future funding so we can improve outcomes.”

Exactly how your impact helps people with neglected cancers

MODULATE reaches over 75% of recruitment target