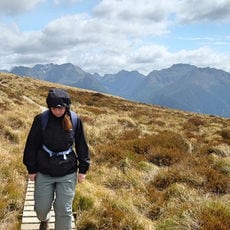 Ally Burnie’s grandfather was diagnosed with a gastro-intestinal stromal tumour (GIST) in 2004. GIST is a rare form of cancer that can occur anywhere in the digestive system. When it is diagnosed at an early stage it can be surgically removed, but there is no standard screening test for it in Australia – rare cancers are more difficult to study and lack funding for research.

Ally’s Papa was diagnosed with a form of GIST that could not be surgically removed.

“It’s a rare thing in general, but they said it would never spread,” says Ally. “Then last year – I don’t know the details, but it started spreading and it went downhill from there.”

She remembers that he lived life to the fullest while battling his illness, continuing to travel and spend time with his family and friends. He passed away earlier this year after 14 years of living with cancer.

In memory, this October Ally will spend her 25th birthday climbing to Mt Everest Base Camp.

“It’s my quarter of a century birthday, and I want to do something for my Papa, to honour him,” she says.

The trek to Base Camp reaches altitudes above 5,500m. This is Ally’s first time scaling a mountain, but she says that she wanted to take on an ambitious project to help people like her Papa.

“It will be a sense of personal achievement to say that I’ve put my mind to it and I’ve conquered it,” she says. “I know that he was really proud of me for doing this, and knowing that will push me to get there.”

You can click here to learn more about Ally or support her.