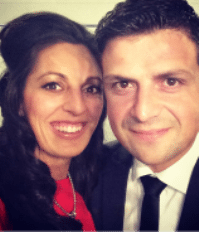 I was diagnosed with bowel cancer at the age of 25.

Never in my wildest dreams did I think that this could happen to me. At least not in my 20s.

The symptoms first began when I started noticing some bleeding, so I went to my GP straight away. My doctor, considering my age, told me not to worry and that it wasn’t anything serious. However, I knew something was wrong and I continued to lobby for further investigation. At first I was misdiagnosed, but in July 2008 it was confirmed that I had bowel cancer.

I was told I had bowel cancer in the midst of planning my wedding. The news shocked me … scared me … but most of all devastated me.

The most daunting part for me was the fact that it was unknown, I had no idea about it and the perception was that 25-30 year olds never get bowel cancer.

My oncologist gave me the statistics … it’s scary; I had a 40% survival rate. All I could think was “What about my family?”

I had surgery and six months’ worth of chemotherapy. My treatment was guided by latest research, and a multi-disciplinary approach was taken on by my oncologist. I was lucky that I was given the best available treatment, but unfortunately I had a relapse. More surgery was the only option, so I had to go under the knife yet another time.

I got married in February 2009, and fell pregnant with my first child in 2011. But the battle was not over yet. During my pregnancy my oncologist noticed that my cancer had spread to one of my ovaries, so I had to have it removed.

Miraculously, my partner and I were blessed with our second child in December 2012.

Currently, I am cancer free but still under frequent surveillance, getting regular blood tests and annual CT and pet scans.

Research and advances in treatments is what saved me … and it is what will save me in the future as well.    Clinical trials and research are so important, there is no other way. If we want to find a cure in the future, support for organisations such the GI Cancer Institute is crucial.

I want to be around for my kids, and their kids, so I will continue to do what I can to raise awareness and funds for GI Cancer research.