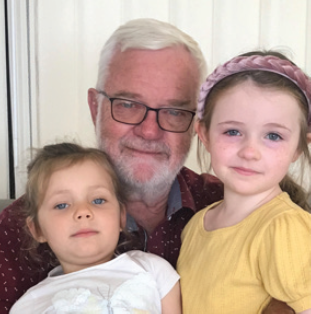 Ask Bruce Cheek what’s the greatest regret of his life and his answer comes without hesitation: not getting tested earlier for the bowel cancer that nearly claimed his life.

“I was just fundamentally silly, because I knew the risks but believed the risks weren’t going to happen probably until I was 65. I now know that to be completely untrue,” he says.

The 69-year-old had a history of bowel cancer in his family, but as is so often the case, a busy life got in the way of regular tests. And because bowel cancer is often asymptomatic in its early stages, he had no way of knowing the cancer was beginning to develop much earlier than he imagined it might.

It was only when Bruce thought he saw blood in his stools that he decided to get checked out. The results shocked him and his family – Stage 3 bowel cancer, which had spread to two lymph nodes. Bruce believes now that he was extremely lucky to have caught his cancer when he did. He had surgery to remove part of his bowel, followed by six months of chemotherapy. Today, Bruce is cancer-free, but suffers from lingering neuropathy in his fingers and toes, a side effect of the chemotherapy.

Bruce’s own cancer experience made him interested in the research side of treatment, so when he was asked to be part of the GI Cancer Institute’s Consumer Advisory Panel, he gladly agreed.

“The thing that really interested me was that they are a trials group and they’re interested in translational research,” he says.

As a result, he gets to read many projects which never see the light of day, because of lack of funding.

“There are literally hundreds of really good, really important, cost-effective research projects that are out there and not being funded. I think it’s really important the public is aware of the opportunities that are lost if there’s not enough money available for research, and important advances which could be made.”

Bruce, who took part in a couple of trials himself, knows firsthand what a difference they can make. For him, research has made all the difference in the world.

“In my case, if it hadn’t been for the investment in cancer research I would never have known my grandchildren. That would’ve been the greatest disappointment, without a doubt.”

Share
How much do you know about Colorectal Cancer?
2021 Grants