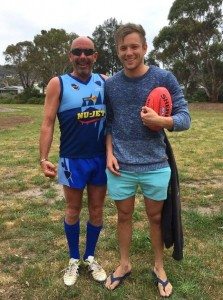 As an avid fan of football, a loyal supporter of the Melbourne Football Club, and a doting father, Mick Miller never missed watching his son’s team play. Every Saturday for the past 6 years Mick cheered for his son Kase’s Southern Football League (SFL) team.

“We used to joke that it would be surprising for people to hear that Dad was a deeply religious man, each game day he would make me and my brother Kase kneel before the hallowed team photo of the Melbourne Football Club and pray for a good result!”, says his daughter Celeste.

Mick was an encouraging father and taught his children to play football at an early age. At last year’s Miller family annual sports/picnic day, the theme was to dress as your favourite sportsperson- and Mick arrived as his son (pictured). Two months later he suddenly passed away.

Diagnosed with oesophageal cancer in October of 2014 and given 6-18 months to live, Mick was only 62 when he passed away in February after a sudden decline — having only driven himself to the hospital three days earlier. He was surrounded by his family singing him Johnny Cash, Bob Dylan and the Melbourne Football Club song. Stated in Mick’s eulogy, his nephew Jody holds out hope for a time when they would “laugh together again”.

It was the shock of this eye-opening experience that impelled Celeste and Kase to honour his memory by teaming up with the SFL to raise funds for G.I. cancer research. She says: “The treatment options are so limited for people diagnosed with oesophageal cancer that the outlook is bleak for many sufferers, and they don’t have a real chance to fight.   The GI Cancer Institute clinical trials give people that chance.

If my Dad had been sitting at a game last year and heard the same information, who knows – it may have given him the fighting chance he didn’t have, so we hope to do the same for someone else’s Dad, Uncle, Pop, Mum… we can’t accept what happened to our Dad and let that go for others to suffer, we can change the statistics around”, says Celeste.

Remembered as being a ‘popular’, ‘funny’ and ‘kind’ man, Celeste and Kase’s father was dedicated to the community, having established a local annual festival and also a golf club. Although constantly teased by his family about his love of country music, Celeste says: “He was the best dad in the world, always taking time after a busy day at work to play football or cricket with us and he never missed a moment with us.   He grew from being our father to our hero, and later in life, best mate”.

Celeste and Kase hope their efforts will help save lives by raising awareness amongst the community about G.I. cancers. “If we can get one person to raise symptoms or risk factors with their GP this will be enough for me”, she says.

Round 15 of the SFL, which is the G.I. cancer awareness round, will be held in various locations around Tasmania on Saturday the 8th  of August. To help support Celeste and Kase’s cause please visit  https://give.everydayhero.com/au/sfl-gi-cancer-awareness-round.