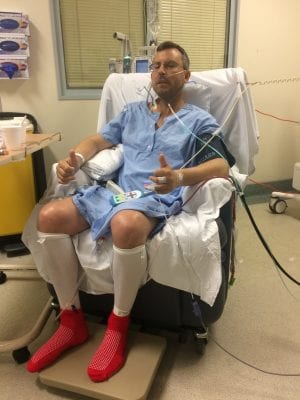 In October 2018, 46-year-old Chris Schwarzer was doing his best to ignore how unwell he felt as he threw himself into his job as a civil engineer on a major infrastructure project. When he looked in the bathroom mirror at work and saw a yellow, jaundiced face looking back at him, he knew something was terribly wrong.

So did his GP, who sent him straight to hospital. It was the middle of the night when he received the news that completely shattered his life: Chris’ tests showed he had pancreatic cancer.

“I was so scared,” says Chris. “The only thing I had going for me was that my tumour was small and it was discovered early.”

Chris was right to be scared. Pancreatic cancer has one of the lowest survival rates in the world. Right now, less than one in ten people live more than five years after their diagnosis.

Even more worryingly, the incidence of pancreatic cancer is on the rise. Experts believe that in just ten years, it will be the second leading cause of cancer death around the world.

Like most healthy people, Chris had never really thought about serious illness, working hard through the week, and coaching his daughter’s soccer team on the weekend.

He was facing the very real possibility that he might not see his children grow up.

“When I told my wife, she was shattered,” says Chris, “But we both said, ‘Look, we’re going to do the best we can to fight it.’”

Major surgery removed the tumour, along with half of his pancreas, and then Chris started chemotherapy treatment. The experience was far worse than he could have imagined. He found that it knocked him about badly, and he became seriously depressed.

Through everything, Chris’s priority was to shield his kids from what he was going through. No matter how bad he felt, he would put on his bravest face whenever he was around them.

“I’d use all my mental power to get up when they came home from school. Say hello, just be nice,” he says.

It was a long, hard road. Chris’s wife Annabel was a source of “amazing support” and together they were determined not to give in to despair. Life for their young family, however, had changed dramatically, forever.

One reason is that, unlike Chris, most pancreatic patients do not feel any symptoms at all until the cancer is very advanced. Another key reason is that the pancreatic tumour grows a hard, protective casing, called the stroma, which stops chemotherapy drugs from getting in.

To break down the defences of pancreatic cancer. The GI Cancer Institute is launching one of its most important research programs yet into pancreatic cancer, led by Dr Lorraine Chantrill. The Neo-IMPACT trial has the potential to transforming our treatment of this silent killer and save thousands of people each year.

The Neo-IMPACT trial will use a novel immunotherapy treatment along with standard treatment in early-stage pancreatic cancer patients, with the aim of stimulating the immune system to attack the cancer itself.

As a clinician, Dr Chantrill knows first-hand the anguish of having to tell her patients their chance of survival is slim. It’s made her even more determined to give them hope. She thinks this approach could be the answer clinicians have long been searching for.

Taking every day as it comes

Today, Chris is slowly recovering from his ordeal. He walks around the block. He’s started going back to watch his kids play soccer. Most of all, he tries to make the most of every precious day with his family.

Chris is rare – a pancreatic cancer survivor. There are so few. We need to do so much more to improve treatments and save lives. Only research like Neo-IMPACT will provide the answers.

Find out more and support the Neo-IMPACT trial here.