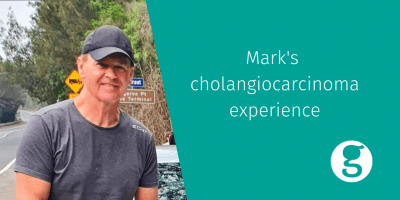 “Every day is a blessing” – Mark’s story

In October 2016, 55-year-old Mark McAllister started feeling an itch in his hands. As it progressed up his forearms, he thought perhaps he’d picked up an infection from his local gym.

The itch grew worse, until eventually he returned to his GP, telling him it wasn’t a skin rash. “I said, I think this might be something to do with my liver.”

The last thing he expected was cancer.

Mark was referred to a specialist and had an urgent MRI. The diagnosis, when it came, caught him completely off guard. He had barely left the hospital car park when his specialist called and asked if he was with anyone. He told him to pull his car over.

“Mark, you’ve got a carcinoma in your bile duct,” he said. “I was in shock – I was really freaking out.”

Any diagnosis of cancer is distressing. But for Mark, the stakes were even higher. His cancer, also known as a cholangiocarcinoma, is so rare, there is very little research available on the best way to treat it.

“I knew it was going to be serious,” Mark says.

From an unexplained itch to a major surgery – Mark’s head spun as he struggled to grasp what was happening. His surgeon explained his bile duct was blocked by the carcinoma. After a stent was installed to help drain his bile, Mark underwent a “Whipple” operation, which carries its own grave risks. While the operation was a success, Mark’s road to recovery was far from smooth. Over six weeks, the former rugby league player lost nearly 20 kilograms. Due to the invasive nature of the surgery, his stomach struggled to absorb food.

When Mark was well enough, he returned to see his surgeon, who gave him the blunt news: “There’s not much clinical data available for your type of cancer as to the best post-operative treatment.”

But his oncologist gave Mark a lifeline – a clinical trial called ACTICCA-1.

The ACTICCA-1 trial was conceived to determine whether or not treating bile duct cancer patients with the chemotherapy drugs, cisplatin and gemcitabine, after surgery is better than the current standard of care (capecitabine) in helping to reduce the risk of cancer returning. These two drugs are commonly used when the cancer is advanced, but weren’t used for early-stage cancer after surgery.

Trials like ACTICCA-1, which focus on rare and neglected cancers like cholangiocarcinoma, face immensely challenging obstacles to secure funding.

Six out of twelve cancer types with the lowest five-year survival rate are GI cancers – including cancers of the bile duct. Collectively, rare and less common cancers are responsible for a quarter of all cancer patients.

For Mark, the trial gave him hope. He felt not only a sense of relief but a duty to help others.

“The way I look at it, there’s no way to get an answer if you don’t do trials.”

Find out more about how you can support the ACTICCA-1 trial here.